“Deem And Pass”: Getting To Know Today’s Political Buzzword 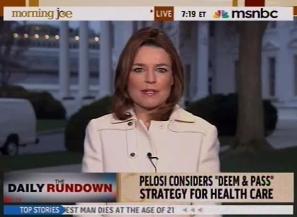 Some have called it the “slaughterhouse rule.” Others say “self-executing rule.” One Democratic Congressmen on FNC called it a “self-implementing rule.”

But here’s what you need to know about the new possible strategy by Speaker Nancy Pelosi to pass health care reform, known as “deem and pass.”

The “Deem and Pass” rule (which sounds a bit like Demon Sheep) is described this way by the Washington Post:

Pelosi (D-Calif.) would rely on a procedural sleight of hand: The House would vote on a more popular package of fixes to the Senate bill; under the House rule for that vote, passage would signify that lawmakers “deem” the health-care bill to be passed.

The tactic — known as a “self-executing rule” or a “deem and pass” — has been commonly used, although never to pass legislation as momentous as the $875 billion health-care bill. It is one of three options that Pelosi said she is considering for a late-week House vote, but she added that she prefers it because it would politically protect lawmakers who are reluctant to publicly support the measure.

USA Today notes this has been used several times by both sides of the aisle, but Lawrence O’Donnell on Morning Joe argued it has never been used because of the magnitude of this specific bill.

According to TV Eyes, as of 9:15amET “deem and pass” has been mentioned six times on MSNBC and three times on FNC today (not yet on CNN). It was discussed a little yesterday as well, but not any time on any cabler before 6pmET last night.

So expect to hear and read a lot more about “deem and pass” (the new “reconciliation”?) today and the rest of the week as the health care bill continues to make its way toward an inevitable conclusion.