Defying Expectations! Why Trump’s Embrace Of Black Lives Matter Could Change Everything!
Opinion

Defying Expectations! Why Trump’s Embrace Of Black Lives Matter Could Change Everything! 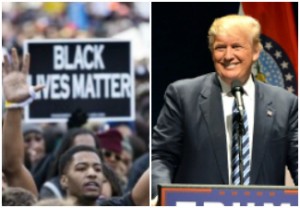 After a week of senseless violence suffered by black and blue, it seems evident that the need for a national “conversation” about race, the solution that is so commonly, conveniently and callously offered after such tragedies, is not enough.  What makes such a chat especially unproductive is the tendency for the same political players to make the same typical arguments and then for everyone to wonder why nothing has changed when the cycle repeats itself.  Enter the political wrecking ball known as Donald Trump.  A unique leadership opportunity now exists for Trump to create real change and I hope he grabs it.

A major problem right now is that individual behavior continues to be wrongly assumed to be representative of the larger group.  Several bad cops, of course does not prove the entire police force hates all African Americans and several violent Black Lives Matter protesters, of course does not delegitimize the entire movement.  Trump should understand this right now more than most, since he continues to wrongly be held accountable for what his fringe supporters say or do.  Do white supremacists and racists support Trump? Most of his critics would say yes, but why then should it be assumed that Trump shares the beliefs of the lunatics that follow him?

And so who better than Trump to embrace Black Lives Matter? Trump has demonstrated an ability to stand up to the most conservative opinions in the Republican party and survive. Now he can do so, not simply for cynical political gain, but also because taking steps to bridge the racial divide would actually be a noble and universally appreciated act.  If Trump defended Black Lives Matter, and even pledged to prioritize pursuing many of their objectives in his administration, he would defy everyone’s expectations, open up his candidacy to new voters who otherwise would never consider voting for him and as the ultimate negotiator, could bring about real compromise and change to police procedures.

Absent such a bold move by Trump, I fear the predictable same steps on all sides will be followed.  Republicans will strongly defend the police at all costs, ignore and belittle Black Lives Matter, and perpetuate the false perception that they have no interest in listening to or helping minorities.  Democrats meanwhile, led by Hillary Clinton, will continue urging everyone just listen to each other and then magically things will . . .  get better?  So everyone talks, everyone listens, but both sides remain tone deaf to progress and real solutions.  Now is Trump’s chance to reach past everyone and work with Black Lives Matter, expand his appeal, cement his unpredictability and shock everyone.  Sounds like a good deal to me!

Matt Schneider is a former lawyer turned comedian and writer. You can follow him on Twitter @SchneiderFactor or check out his self-proclaimed “hilarious” videos at SchneiderFactor.com.