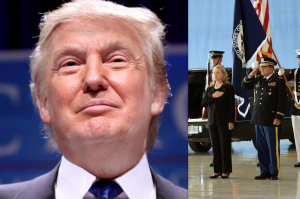 On Monday, Democrats released their findings on a report that looked into 2012 killing of four Americans in Benghazi, Libya, an attack that happened under while Hillary Clinton served as Secretary of State. It it unsurprising that the 339-page report was released just ahead of the Republican-led House Select Committee report, and as the general election rhetoric heats up.

While the Republicans are expected to release a report that finds high culpability within the State Department and likely Secretary Clinton herself for personally denying requests for additional security at the Benghazi compound, the Democrats on Monday argued the opposite. “We hope our report will put to rest the conspiracy theories about Benghazi once and for all and return the focus to where it belongs—on the goal of improving the security of Americans serving abroad,” the report reads in part.

But the sprawling report — presented by the committee consisting of Elijah Cummings (MD – Ranking Member), Adam Smith (WA), Adam Schiff (CA), Linda Sanchez (CA), and Tammy Duckworth (IL) — includes one peculiar fact hidden deep within its 339 pages. Although the investigation at hand dealt with the security measures and requests for assistance at the compound in Libya, the report makes dozens of references to Donald Trump.

Most of the uses of the GOP presumptive nominee’s name come in the form of debunking claims he has made in interviews about the former Secretary of State’s role in the attacks. Here is one such example from page 134:

For example, presumptive Republican presidential nominee Donald Trump stated on Fox News: “Look at Benghazi, our ambassador. He wired her 500 or 600 times asking for help.” The Washington Post Fact Checker addressed Trump’s claim, calling it “a whopper” because no requests for additional security went to Secretary Clinton.

Entire interview pull quotes from Trump’s various cable new sit-downs are referenced or even transcribed in the Report. But it is a tough sell for Democrats not to claim that the report from these findings is so heavily influenced by the fact that their own party’s presumptive nominee just so happens to be the person under investigation. After all, Tyrone Woods and Glen Doherty — two of the Americans who lost their lives in Benghazi — are referenced fewer timesnot than Trump.

A Ctrl+F search of the 399 pages reveals 23 references to Donald Trump; admittedly, many of those are accounted for as hyperlinks in Endnotes, a point that the Republican Select Committee on Benghazi was negligent in mentioning when it trumpeted the statistics earlier today. The number of Trump mentions accurately is 13; that still “trumps” mentions of Doherty — 12 — and Woods — 4 — when you remove their names from the Executive Summary and Conclusion sections, which listed the deceased Americans free of investigative substance.

The names of Ambassador Christopher Stevens and Sean Smith are used dozens of times each in the Report, Stevens’ 70+.

For those of you who fondly remember spending eleven grueling hours in October watching Clinton testify in front of the committee, it should come as no surprise that the Democrats have decried this as a political witch hunt virtually since day one. Elijah Cummings said to Clinton that day, “Do we want to badger you over and over again until you do get so tired so we get the gotcha moment?”

As CNN’s Stephen Collinson and Ted Barrett lay out, “The Democratic report includes 12 recommendations, that include suggestion for improving State Department security at U.S. posts overseas but also take aim at Republicans on the committee who it accuses of politicizing the Benghazi tragedy.”

But it is a tough sell to argue that the general election is not at stake — and that Clinton’s status as party nominee is not at jeopardy — when a Benghazi committee report is making any references to Trump at all. This isn’t the mid-day lunch hour of a cable news network checking in on the latest rally and hitting an obligatory mark of Trump coverage; this is supposed to be — as the report purports — submitted, “…in honor of the memories of Ambassador Christopher Stevens, Sean Smith, Tyrone Woods, and Glen Doherty; the other extraordinary heroes in Benghazi and Tripoli who risked life and limb to help their fellow Americans; and the men and women of the Defense Department, State Department, and Intelligence Community who serve the United States every day around the world.”