Did Bill O’Reilly Go Soft In His Interview With Janet Napolitano?
video

Did Bill O’Reilly Go Soft In His Interview With Janet Napolitano? 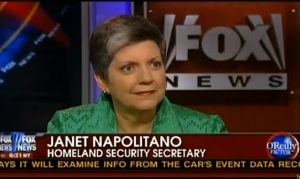 Bret Baier‘s interview with President Obama wasn’t the only intersection of Fox News and the White House yesterday; Homeland Security Secretary Janet Napolitano appeared on The O’Reilly Factor last night as well. And where the Baier/Obama sit-down was at times contentions, Bill O’Reilly was remarkably nice in interrogating the individual with whom he has vocally criticized, particularly during the Christmas Terrorism scare of three months ago.

It isn’t a surprise really – O’Reilly is no longer the flame thrower that he was when he was coming up during the later years of the Clinton administration, and hasn’t been for years. Candidly, its hard to tell if O’Reilly has become more moderate or there are just more extreme examples of the form, but that is a post for another day.

The polite and respectful tone with which Napolitano was treated is completely consistent with O’Reilly’s modus operandi; he is, after all, a self-described traditionalist. And treated elected officials (and cabinet members at the highest level) with respect and decorum is a tradition that O’Reilly has always followed. But its instructive that O’Reilly played so nice with Napolitano on the day that Obama appeared on Fox News with another host. Perhaps he was demonstrating to the current administration just how he would play with the president – not soft, but respectful and courteous in tone.

The great hope here is that Obama and his staff see the virtues of going on The Factor; its something that we recommended to the president back in September. In fact, one can only wonder where we would be with the current Health Care debate had the White House chosen to engage with Fox News, instead of developing an inimical relationship with the dominant cable news outlet.