Did Lady Gaga Get Tricked By A Cruel Twitter Hoax? (VIDEO) 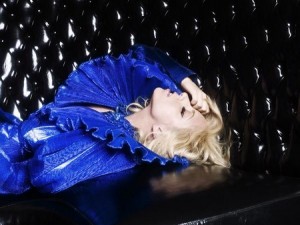 Last night, Lady Gaga took a pause during a concert in Manchester, and gave a heartfelt dedication to a young girl named Ana who was a devoted Gaga fan and had just tragically passed away due to Leukemia. Gaga spoke about how heartbroken she had been all day and even wrote a message to the girl on her stomach. Today though, Lady Gaga fans are in an uproar. Why? Because many believe that Ana never existed and was just a cruel trick someone has played on the pop singer. In a post on Crushable, Nick Rizzo posted fairly damning evidence to support the hoax theory. If it is a hoax (which we certainly hope for, if only because it means there was no child taken before their time), why would someone do it?

It all started when a Twitter user named JoelxSoul tweeted yesterday: “This is a moment of sadness, as I have to share the news I hoped I’d never have to share. This a.m. my baby sister Ana (@analilmonster as you probably know her) lost her, almost 5 year old, battle against acute lymphocytic leukemia.” Soon afterwards, he began asking Gaga fans and Twitter friends of his sister’s to pass a letter he’d written about Ana’s courage and strength to Lady Gaga. They complied and soon both Perez HIlton and Gaga herself had reposted Joel’s letter on Twitter.

However, when people started looking into the story, they began to notice some odd inconsistencies. From Crushable:

“Unfortunately, there are a number of troubling clues to suggest that this a hoax: Ana’s Twitter account is only five days old. She discusses only cancer and Gaga, and is apparently not connected on Twitter to anyone that she’s met in real life. She mentions her brother but never her parents, and provides no details of where she is, except for a reference to Gaga being a trending topic in Baltimore. She @messages some other Gaga fans on Twitter, and on Tuesday night is discovered by a Twitter user called “edwitched,” who tells his followers about her. She tells one of her new Twitter friends that she’s not on Facebook.

Meanwhile, Joel’s Twitter has only existed since last night, when he tweeted “@Analilmonster Hi love you baby sis. Have a good night, princess.” He followed up this morning with 13 tweets about her death and her feelings for Gaga, all in the space of an hour, before going quiet again. He writes that he doesn’t want media attention, but leaves absolutely no way for Gaga, or anyone else, to get in touch with him.

It seems unlikely that Joel would start his Twitter the day before his sister died, with a single message to her, and that he would be so focused on getting her story spread throughout Twitter immediately after her death. (A representative for Lady Gaga was not immediately available for comment.)”

That tweet Rizzo mentions about Ana not having a Facebook is particularly odd since a user on YouTube is refuting those claiming it’s all a hoax by saying that he was friend friend’s with Ana on Facebook. Who’s lying? Are they all? If so, why would they?

In another post today on Crushable, Rizzo points out that pretending to be a sick or dying person on the internet is (disturbingly) nothing new.

The most infamous case, that of Kaycee Nicole, lasted from 1999 to 2001 and involved a 19-year-old girl dying of leukemia who turned out to be a very-much-alive 40-year-old woman. This case is different from traditional Munchausen by Internet because, instead of trying to hoodwink an internet community, it is specifically aimed at influencing one particular celebrity.”

When we first heard of this story, we were worried about whether or not to cover it. There is still a chance (despite mounting evidence to the contrary) that a 14 year old Lady Gaga fan died yesterday. People have asked Joel for some proof to his story, all he responded with was a tweet saying, “what some of you are saying about my family is not acceptable. Truly sorry it came to this” Again, as sick as it is, we hope that this is a hoax. However, if it is, it’s an unsettling look into another way internet anonymity has seemed to warp some people.

UPDATE:
We sent Nick Rizzo an email asking him about the story. First we asked him why he thought people pulled hoaxes of this kind:

“Unfortunately, there are a lot of sick puppies who pull this sort of thing all the time. The people who commit them–like Richard Heene and his Balloon Boy hoax–tend to be motivated by a desire for
attention. Twitter, with its seemingly accessible celebrities, anonymity, and easy-to-judge popularity metrics, makes the phenomenon both easier and more compelling. That being said, “JoelxSoul” will never really be able to tweet much more about this without giving himself away.”

Next we asked him what we were all thinking; what if it isn’t a hoax? His response:

“I’ve given a lot of thought to the possibility that I’m wrong. If that comes out, I will feel absolutely rotten. The largest tragedy would then be that a beautiful young woman was taken from her friends and family too soon. I would also apologize readily and repeatedly, and would be extremely hesitant to ever accuse someone else of hoaxing in such a grave situation. However, I really don’t think that I’ve made that mistake here. I spent hours researching this situation before I published, and I found a number of reasons (most notably the timing, but also others) to make me extremely suspicious. Remember, there is absolutely zero corroborating evidence to suggest that “Analilmonster” died of leukemia yesterday morning. Also, I’ve put my name on my belief that this story is false, and will be embarrassed if I am wrong; Joelxsoul will probably remain anonymous for as long as he wishes.”