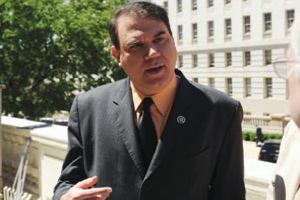 As soon as an oil company was caught possibly behaving inappropriately close to his district, it was a matter of time before Florida Congressman Alan Grayson came out and denounced Dick Cheney for his Halliburton sins. But on talk radio’s Stephanie Miller show today, he threw us a curveball: it’s not Cheney he wants to see in jail for the BP oil leak, it’s… RNC Chairman Michael Steele?

Actually, compared to some of the other antics in Grayson’s portfolio, this one is rather tame. Asked what he would do if someone called him and argued that the liberal position against drilling in the Arctic National Wildlife Refuge was responsible for the disaster currently overtaking the Gulf of Mexico, Grayson answered he would just “hang up.” And then he had another idea: “How about just tracking down every single person who said ‘drill baby drill’ and putting them all in prison. Why don’t we do that? Starting with Michael Steele.”

Miller was sympathetic to the idea, noting that it was frustrating that the people blaming President Obama for the trouble, according to her, were actually the ones responsible. He was probably in the heat of the moment– it isn’t difficult to believe with Grayson– but, um, there are some serious First Amendment issues that need to be addressed before we put anyone in jail for coining a silly phrase. And if coining silly phrases become a crime punishable by jail, the oil spill will be the least of Michael Steele’s worries.