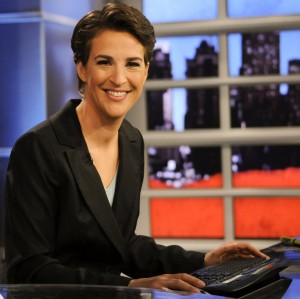 MSNBC Host Rachel Maddow recently visited Afghanistan — and anchored her show from the country — to find out what was really going on and to see for herself whether we’re fighting a losing battle. Fair enough. But Tom Hayden, in The Nation, argues that Maddow did not make the best of her time there, and, indeed, missed a potential Walter Cronkite moment.

Maddow’s trip to the war-torn country was similar to Cronkite’s trip to Vietnam in 1968. Cronkite said the war was “mired in stalemate” and we’ve all heard Lyndon B. Johnson’s famous reported remark: “If I’ve lost Cronkite, I’ve lost middle America.” That is a testament to the influence Cronkite had and the respect he commanded.

Hayden, himself, is known for his social and political activism and anti-war involvement in the late 1960s. In The Nation, he draws a parallel between Vietnam and Afghanistan and asks, “Isn’t this precisely the situation in Afghanistan today, or worse? The war itself is not going well.” — and many people want out. Drawing from these similarities, he wonders why Maddow didn’t ask Richard Holbrooke more pointed questions:

Maddow never questioned Holbrooke’s repeated contention that Afghanistan is not Vietnam, where the youthful Holbrooke himself was involved in a failed counterinsurgency almost 40 years ago.

Couldn’t Maddow have challenged the core justification for the war, not just how well the war is going? Indeed if American lives and national security are at stake, the military doctrine of the 50-80 year “long war” would seem justified.

Here is where independent journalism is so critical. Maddow might have asked why 100,000 US troops are fighting in a country where the CIA estimate of Al Qaeda numbers is less than 100, and whether the US intervention itself has pushed Al Qaeda to sanctuaries in Pakistan and Yemen [featured last week as the next Al Qaeda base in a New York Times cover story].

The remarks at the end of one segment were the closest Maddow came to what Hayden thinks she should have questioned:

To be fair to Maddow, she at one point wondered if “maybe the clock has run out” for saving Afghanistan, and questioned if the counterinsurgency campaign is being fought on the “wrong premise” that there really is an Afghanistan regime that can be revived. In her concluding summary…[Maddow] was ambiguous, asserting on the one hand that it’s wrong to ask young Americans to fight and die if the Kabul regime is beyond repair, while on the other hand claiming that “development, training, support [are] OK, but lives, no. That’s the choice, not partisan, not even passionate. It is rational.”

Hayden concludes that “Maddow is less bold today on Afghanistan than Cronkite was on Vietnam 32 years ago, though the CBS anchor was by far the more mainstream of the two.” The Maddow/Cronkite comparison is interesting because of the parallels between the two wars. But a lot has changed in those 32 years, and it is important to keep a relative perspective of things: Maddow may have a quite a fan base and one of her network’s more popular shows, but she arguably does not wield the same degree of influence that Walter Cronkite did.