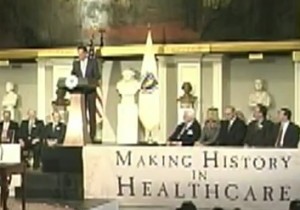 The traditional gift for the 6th anniversary are either iron or wood (although unless you’re a Vulcan, you should be giving that more often than once every six years*), but presumptive Republican presidential nominee Mitt Romney will have to settle for a couple of YouTube videos from the Obama campaign and progressive SuperPac American Bridge. The groups took markedly different approaches in wishing Romneycare a Happy Anniversary.

The Obama campaign released their video along with the following message:

Now that Romney is running for president, apparently he doesn’t believe in taking on rising health care costs or providing affordable accessible health care to all Americans. He advocates letting insurance companies go back to dropping Americans’ coverage when they get sick, discriminating against those with preexisting conditions, and making women pay more for their health care. The video features John McDonough, an architect of Massachusetts health care reform and the Affordable Care Act; Jonathan Gruber, consultant to both the Romney and Obama administrations; and Madelyn Rhenisch, the first Massachusetts resident to enroll in Romneycare.

Here’s the video, from Obama For America:

Aside from tying Romney to the individual mandate, it will be important for Democrats to remind voters that Romney, despite his insistence to the contrary, has recently, frequently, supported the mandate on a national level. For example, in a 2009 Meet The Press appearance, Romney endorsed theHealthy Americans Act, also known as the Wyden-Bennett bill, which would have “establish(ed) Healthy Americans Private Insurance Plans (HAPIs) and require those who do not already have health insurance coverage, and who do not oppose health insurance on religious grounds, to enroll themselves and their children in a HAPI.”

Here’s what Romney said then: (emphasis mine, h/t Ezra Klein)

…the right way to proceed is to reform health care. That we can do, as we did it in Massachusetts, as Wyden-Bennett is proposing doing it at the national level. We can do it for the nation, we can get everybody insured, we can get the cost of health care down, but we don’t have to have government insurance and government running health care to get that done.

With the Supreme Court expected to rule on the Affordable Care Act in June, it’s unclear how Romneycare/Obamacare will cut come November, but either way, tying Romney to the individual mandate, which his Republican opponents consistently did as well, is still a smart move. If the bulk of the law, and/or the mandate, is upheld, Obamacare will be more of a political win for the President than if it isn’t, and if it’s overturned, ads like these will provide an effective counter to the Romney attacks that will surely come.

* To those of you leaving fervent comments alerting me to the fact that the Vulcan Pon Farr ritual happens every seven years, not six, you have just walked into on of my patented Dork Traps™. Not even Corbomite can save you now.