Do Web Ads Give Newspapers — Or Bloggers — Any Hope?

Do Web Ads Give Newspapers — Or Bloggers — Any Hope? 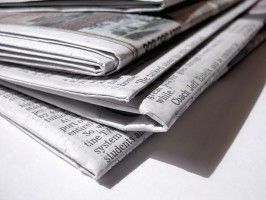 For all of the advertising woes that printed newspapers have encountered over the past few years, it’s an open question what will happen to them as they shift their focus online. The New York Times‘ Stephanie Clifford (who has been turning out really fascinating stuff week after week lately) warns that the Web may not be the Promised Land of newspaper ad sales, but there are a few hopeful indicators.

According to Clifford, advertisers tend to use newspaper sites to make a one-time splash, as when Mercedes rolled out its new line of E-Class cars on the NYT, WSJ, and Washington Post websites this past summer. But once the splash has been made, they shift their resources to other, cheaper networks:

One reason newspaper sites do not appear to be bouncing back as much as the overall Internet is price: after advertisers introduce their splashy campaigns on news sites, they can follow up with cheaper ads all over the Web.

“You get the big audience reach on your national brands, and you guarantee that by buying USA Today or The Times or other properties. And a secondary buy, you buy inexpensive, low-c.p.m. ad networks,” said Mr. Saridakis, using the industry shorthand for cost per thousand times an ad is shown. A display ad that might cost $10 to $20 per thousand at a site like USAToday.com could cost around half that amount when it is bought across an ad network of similar sites.

“They’re basically trying to buy the same audience at a third of the price,” he said.

If bloggers reading this think they have cause to gloat, they don’t. What’s at stake here isn’t fancypants newspaper articles upheld by bloated staffs, but smart, effortfully generated content, period. If eyeballs are eyeballs are eyeballs, regardless of quality of product, why bother building up a brand, personal or institutional? Why analyze when you can copypasta?  In short, what’s the point of trying if a pageview for a painstakingly written post has the same advertising value as an SEO-optimized 50 word rehash?

There’s a glimmer of hope in this Knight Digital Media Center writeup of a speech by Slate’s David Plotz:

More sophisticated ways of measuring usership and engagement will change focus from mass audience, Plotz believes, and that will make journalism better. Raw numbers create “pressure to produce one kind of story” that will draw hits. New metrics of engagement and behavior offer a “tremendous opportunity for Web journalism to escape the traffic” trap. He believes that will liberate Slate to “make a magazine that recognizes those dedicated readers.”

The fight at hand isn’t newspapers versus blogs versus splogs versus LOLcats, but between competing metrics. As long as CPM is the gold standard for online ads, advertisers will have a strong incentive to follow the eyeballs around, which they have the technology to do with a great degree of precision. Engagement-based metrics like Plotz advocates could free bloggers from the commoditization of their work, the lumping together of all types of content. But will they really be the metrics to win out in the end, or is that just a blogger’s pipe dream?