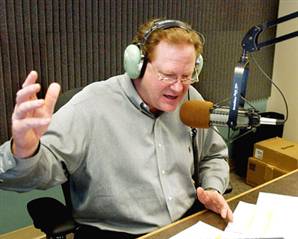 We’ve written a lot in the past few months about notable liberal media fixtures like Jon Stewart and Bill Maher who have become disenfranchised because of the seeming lack of real progress that the Democrats in the White House and Congress have been able to accomplish since 2008. Neither of those two comedian, however, reached the passion level (and, uh, decibel level) of Ed Schultz who let the Dems in power absolutely have it today during his radio show. His frustration turned into a complete meltdown that began with calling the Republicans “anti-American” “psycho-talkers” and built from there.

Schultz was furious that Democratic senators were spending time investigating BP involvement with the release of Pan Am Flight 103 bomber Abdelbaset al-Megrahi instead of focusing on what he views as more pressing matters like American jobs moving overseas.

“Look, Democrats, I’m your best friend. I’ve been across the country. I’ve taken thousands of e-mails. Our team works 16 hours a day. We do a TV and a radio show. I’m trying to tell you what the hell’s going on! But you sit back! And Harry [Reid], you are ball-less. You won’t do the nuke option for the American people and shove the Republicans into the ditch. Shove those bastards right into the dirt-hole. This is about power. It’s about winning. It’s about saving American lives.”

This is what I love (loose definition of the word) about political talk radio. I can listen to Schultz go on about how the Democrats aren’t doing anything and then I can switch over one dash on the dial and listen to a nearly identical angry, white guy with strong vocal chords scream about how the Democrats have magically transformed the country into Nazi Germany. It’s as if my radio dial is some kind of science fiction device that enables me to traverse the distances of time and space and cross parallel dimensions. So thank you, political talk radio, you help my morning commute turn me into some kind of Dr. Who character.