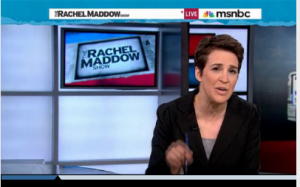 Wow. Rachel Maddow will not be giving the Tea Partiers any sort of free pass. While there has been a noticeable shift in the mainstream media of late to respectfully treat the Tea Partiers as the newest incarnation of the GOP and a force to be reckoned with come this November, Maddow is not budging much in her criticism and once you watch this you will likely understand why. Specifically, she is criticizing (actually, she’s eviscerating…no joke) what she calls the Tea Partiers “embrace of racist history.”

On Saturday Maddow referred to Rep. Tom Tancredo — whom she described as a “failed presidential candidate” and “professional anti-immigrant” — as having opened the Tea Party Convention with “a big, loud racist bang” because of his assertion that President Obama was elected by “people who could not even spell the word vote, or say it in English” and then proposed bringing the literacy test back.

At the time Maddow rightly (and righteously) noted that literacy tests were frequently used in the South during segregation to keep African Americans from voting. Last night she picked up where she’d left off on Saturday with a long, more damning description of the shameful practice. Maddow read aloud from Alabama’s literacy test from 1965 (can you answer any of these questions) before declaring her awe and disgust that something similar was proposed just this past weekend.

The whiplash, wake-up point here is not that somebody with a record like Tom Tancredo’s would suggest something like this; he’s made a living out of this shtick for quite some time. What’s important here is that a suggestion like that would be greeted with cheers from an American crowd: ‘Hey, let’s go back to the ways we used to keep black people from voting in this country.'”

Video below. Watch till the end. Perhaps Glenn Beck will be inspired and focus his next “historical” documentary on American Civil liberties instead of communism, etc. Apparently, some people are dearly in need of a refresher.