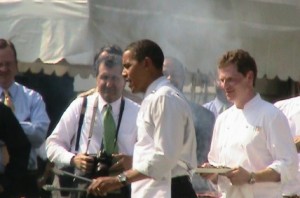 The Onion parody of an expose´ that is Breitbart.com‘s “The Vetting” continued apace yesterday with an item that started out promisingly, but descended into absurdity a few centimeters below their headline, EXCLUSIVE – THE VETTING – SENATOR BARACK OBAMA ATTENDED BILL AYERS BARBECUE, JULY 4, 2005. What they really found was a blog entry from a guy who claims not to have seen then-Sen. Barack Obama at Bill Ayers‘ July 4th, 2005 barbecue. I swear, I’m not joking.

When I saw the headline, it piqued my interest, because even though I could care less if Barack Obama was bestest poker buddies with Ayers, the fact that his 2008 campaign took such pains to distance the two would mean that lots of other people would care. In a way, I was almost a little bit happy for them. After their fail of a reveal that a young Barack Obama attended a diversity protest, and their debunked Kenya bio that reignited Donald Trump‘s Birther flame, I figured they needed a win.

As a presidential candidate in 2008, Barack Obama disavowed any connection with former domestic terrorist Bill Ayers, the Weather Underground radical who was one of Obama’s early backers and his colleague on the board of the Woods Fund in Chicago. We now have proof that Obama’s association with Ayers continued even after Obama had been elected to represent Illinois in the U.S. Senate–in the form of a now-scrubbed blog post placing Obama at the home of Ayers and his wife, fellow radical Bernadine Dohrn, on July 4, 2005.

Ruh-roh, NObama’s really in trouble now! And the guy who wrote the incriminating blog post is an English doctor of English. It doesn’t get much more credible than that. Here’s what Dr. Tom Perrin (then a grad student at the University of Chicago) had to say:

Guess what? I spent the 4th of July evening with star Democrat Barack Obama!

Whoah, Nelly, here it comes, you better hold onto your Secret Koran and your Kenyan umbilical cord!!!

Obama was at a barbecue at the house next door (given by a law professor who is a former member of the Weather Underground) and we saw him over the fence at our barbecue.

Whew! Back on track! Here it comes, Barry Osama! Time to lawyer up, ObaMAO!

Well, the others did. It had started raining and he had gone inside be the time I got there. Nevertheless.

The blog post, and Perrin’s entire blog, were deleted after Pollak tried to contact him for more detail, but Breitbart.com got a screengrab, and this nail in the coffin:

Obama’s presence–as a U.S. Senator–at the Ayers barbecue has been confirmed by another source, who told Breitbart News: “I too saw Obama at a picnic table in the Ayers/Dohrn backyard, munching away–on the 4th of July.”

Really? Did the source go on to say they saw Obama break up a fight between Elvis and Sasquatch over a contested round of lawn darts? Was Tony Hawk there? Was Bobby Flay tending the grill? Oh, wait.

With that sort of attribution (none), the reader is left to wonder. Was it the lady who sits in front of the Au Bon Pain on G Street every night, monitoring the joint CIA/NSA surveillance array above it? Oh, no. I’ve said too much.

Still, with all of those people at both barbecues, maybe Pollak will end up with definitive proof that Barack Obama was at one of them, and then…well, as even Pollak points out, the President’s 2008 campaign left him wiggle room to dip into a neighbor’s BBQ. Breitbart.com has managed the magnificent feat of not proving something that nobody’s denying. Screw it, I saw him there.