Exclusive Interview With Andrew Rossi, Director Of Page One: Inside The New York Times 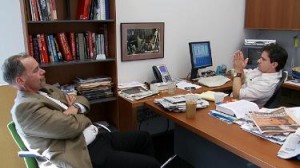 Director Andrew Rossi‘s upcoming film Page One: Inside The New York Times (opening June 17th in New York, and nationally July 1) documents a year in the life of the Gray Lady, but also sets the table for what may either be the print media’s suffocation within, or emergence from, the chrysalis of the brave new media world. Rossi spoke with Mediaite about his film, its de facto star (Times Media reporter David Carr), and what it all means for journalism.

For the average viewer, Page One is an engrossing look inside the machinery of the news, but it is a must-see for anyone with more than a passing interest in the state of journalism. The film focuses on The Times’ Media Desk, particularly on David Carr and Brian Stelter. They are fitting proxies for the audience, as they’re each outsiders, of a sort.

Carr is the nucleus around which the film gathers, and his musings form much of the narration. While a 25-year veteran, much of Carr’s career has been with alternative publications, and his backstory reads more like a pulp novel than the resume of a media reporter for the world’s most prestigious newspaper. His emergence from drug addiction and crime give him a hard, weathered edge.

I asked Rossi how hard it was to resist making world-weary Carr the star of the film. “Initially that was my intention, it was to focus on David,” Rossi says. Carr resisted that idea, he says,  “but ultimately, you know, I think he rises to the level of sort of being the star of the film. He is the Virgil, sort of guiding us through all of these stories in a broader sense like, you know, the audience’s potential feeling of alienation or dislocation in a digitizing world.”

Carr is such a colorful character, and his manner so abrasive at times, that it’s tough to imagine him succeeding for a less-prestigious paper. That’s probably why outsiders like Carr don’t often work their way up the line, from the mailroom to the newsroom, and why Carr is such a one-of-a-kind. He braces sources in a way that lets them know they need him more than he needs them.

Stelter, on the other hand, came to The Times fresh from college, after founding TV Newser . Such a rapid rise lends Stelter an outsider’s perspective of a different sort, the young, new media Turk to Carr’s deeply-etched cynic.

One of the film’s great pleasures is watching Carr’s complete ownership of new media types. He smacks down a conference room full of online entrepreneurs who try to feed him some PR pap, and deals Newser’s Michael Wolff a coup de grace during a debate on the merits of mainstream journalism with nothing more than a printout of Newser’s front page, and a pair of scissors.

In between Carr and Stelter, though, are scores of lifelong Times employees who are being laid off, evidence that they’re waging a losing battle against a media culture increasingly obsessed with profitable, popular fluff, and barely concerned with the future of journalism, the villains of the film. In one particularly evocative clip, Arianna Huffington compares those concerned with the cost-cutting and de-professionalization of journalism to prehistoric stone-tablet etchers, declaring that journalism “has always been a technology business.”

Rossi takes exception with that attitude. “I think it’s utterly insulting,” he says. “She almost says that people who are bemoaning the erosion of financial stability of newspapers, it’s like, who cares. There’s a lot of smart people saying that this is a digital evolution, the road to some utopian future are going to have a lot of dead bodies on the side of the road.”

“That sounds very hardcore and forward reaching,” he continues, “but that doesn’t take into account a lot of original data and information that those ostensible, potential dead bodies are producing. So, what are all these aggregators going to do in the future when there’s nothing to aggregate?”

Commerce above journalism is a running theme in Page One, such as when they show the Gawker “Big Board,” the new media equivalent of The Times’ front page, which runs on giving the people what they want, or Tribune Company CEO Sam Zell‘s contemptuous attitude toward traditional journalism.

“Anybody who can say, you know, that people who are talking about impacts of newspapers going out of business are a bunch of pussies, to me, sounds like a freak.” Rossi says.

The future is uncertain, but Rossi sees some hope in the results, so far, from the paper’s implementation of a paywall. “I know that about 150,000 people thus far have opted in,” Rossi says, “but I also know that the users for the website is typically about 40 million a month, and I think that that has gone down to about 36 million. And that statistic is pretty heartening, an attrition rate of just 10% for the paywall, when there were predictions that traffic would be cut in half or more.”

Rossi’s filmmaking style is intimate, yet cool, allowing the settings and characters to speak for themselves, and eschewing some of the more manipulative techniques of documentarians like Michael Moore.

“I love his films,” Rossi says of Moore. “Fahrenheit 911 was amazing and incredibly entertaining and really important. I agree, it’s really different from the way that I try to make films that are more observational and less with an agenda. It seems like when Michael Moore sets out to make a film, we almost have a problem set that he wants to find the proofs for. The whole movie is on a trajectory towards proving a point. I think that this film, I think there are a lot of imperatives or messages, but I don’t think that it’s out to prove a point. I think it does prove certain things, but it’s not crafted to do so.”

Perhaps indicative of the future that his film tries to lay out, Rossi gets his news from a hybrid of the old and the new. “I subscribe to the daily, print newspaper versions of the NY Times and the NY Post, I get them delivered to my door. And I check twitter multiple times a day. Twitter has become, I think, the real fountain of news stories. More often that not I’m finding stories you know, at the Times, The Journal, the Washington Post, all kinds of blogs, all over the place.”

The New York Times is far from perfect (as the film illustrates by detailing some of its darker hours like the Jayson Blair scandal and Judith Miller‘s pre-Iraq War reporting), but it’s a bellwether for the health of newspaper journalism, and journalism as a whole. Page One offers some hope for its survival, but not much for a suitable replacement if it doesn’t.