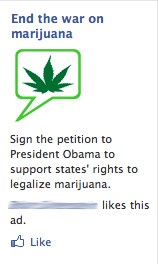 Considering Facebook was created by and for college students, they appear to have a surprisingly negative view of marijuana. The social networking giant has apparently changed positions and banned previously accepted ads from Just Say Now and the Libertarian Party that supported marijuana legalization in general and California’s Proposition 19 specifically. Perhaps the website was trying to appear anti-drug before a certain movie hits theaters.

The ads were apparently doing very well with the Just Say Now version garnering 38 million impressions before the site changed its mind. Facebook blamed marijuana leaves in the ads, citing a rule that bans promotion of “tobacco products,” which is strange considering a cartoon pot leaf is neither tobacco nor a product.

From FireDogLake.com which is helping organize Just Say Now:

“We’re not running ads encouraging Facebook users to smoke pot, tobacco, or to drink alcohol. We are clearly advocating for a political issue that will be voted on in Facebook’s home state in less than three months. If we can’t use the most recognizable image to organize supporters in favor of marijuana legalization, it’s essentially like being banned from showing our candidate’s face in an election.

Facebook’s censorship of this political issue only advances the failed drug policies of our country by blocking an open discussion of these critical issues. Marijuana legalization on the move, but Facebook wants to block the issue.”

Over on the Huffington Post, Ryan Grim points out the danger this entails for the movement saying that “for a typical college student, if it didn’t happen on Facebook, it didn’t happen.” This is especially destructive considering the fact that the voting on this subject in November will probably be split pretty heavily down generational lines. Fortunately, a number of left wing and right wing websites have agreed to promote the ad (which you can see at the top of this post).

Facebook does reserve the right to ban content from their site and they have in the past. Still, it’s hard to imagine that a cartoon pot leaf connected to a legitimate political movement belongs in the same category as a “Kill Obama” poll. Perhaps John Stossel can stop taking on traffic lights and help out a belief of his that actually has a chance of becoming a reality.