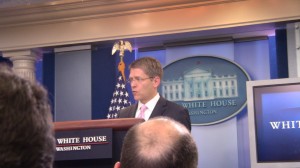 White House Communications Director Dan Pfeiffer resurrected a longstanding controversy Friday when he said that President Obama had not personally filled out a 1996 questionnaire that indicated support for gay marriage. At today’s White House briefing, The Washington Blade‘s Chris Johnson was finally able to get confirmation that the President did, indeed, fill out the questionnaire. Despite Jay Carney‘s protests to the contrary, the White House has not been at all forthcoming in answering that question.

During a Q&A this past Friday at the Netroots Nation conference, Pfeiffer was asked about the questionnaire, and in his response, made the same mistake that Robert Gibbs did when Johnson asked about it in January, confusing it with two other 1996 questionnaires about gun control. The gun control questionnaires were filled out by Obama’s then-campaign manager Carol Harwell.

“If you actually go back and look,” Pfeiffer said, “that questionnaire was actually filled out by someone else, not the President.”

Following Pfeiffer’s remarks, the White House issued a statement explaining the confusion, but still did not confirm that Mr. Obama had filled out the document in question:

“Dan was not familiar with the history of the questionnaire that was brought up today, but the president’s views are clear,” (White House spokesman Shin) Inouye said. “He has long supported equal rights and benefits for gay and lesbian couples and since taking office he has signed into law the repeal of ‘Don’t Ask Don’t Tell,’ signed into law the hate crimes bill, made the decision not to defend Section 3 of DOMA and expanded federal benefits for same sex partners of federal employees.”

This statement is all too familiar to me. Following Gibbs’ January response, I explained to Gibbs that he had been thinking of the gun control surveys, and that the gay marriage questionnaire had never really been addressed, save an oblique reference by then-Senator Obama in a 2004 interview, which seemed to indicate he had filled it out.

He referred me to a deputy press secretary for followup, and after two weeks of emails, I finally received this statement, from Shin Inouye:

The President has made his position on this issue clear – as a candidate in 2008, in his public writings, and in his on the record comments on at least three separate occasions. He’s also made it clear that he supports full civil unions and federal rights for LGBT couples, supports a repeal of the so-called Defense of Marriage Act, and opposes a constitutional ban on same-sex marriage and opposes divisive measures like Proposition 8 in California. His Administration has also taken numerous steps to help secure equal rights for LGBT Americans, such as extending benefits to the same-sex domestic partners of federal employees and ensuring equal access to HUD programs, and we hope to continue making progress.

For a guy whose views are clear, President Obama’s press office sure went to a lot of trouble to avoid answering that question. Yes, confirming this would make it appear he had flipped on the issue, but he handled that very well in that 2004 interview:

The Windy City Times, which later acquired Outlines, said it interviewed Obama in 2004, when he was a state legislator running for the U.S. Senate. In a January 2009 article recapping the interview, the newspaper quoted him as saying he no longer supported same-sex marriage “primarily just as a strategic issue,” and not because he had changed his philosophy.

“I think that marriage, in the minds of a lot of voters, has a religious connotation,” Obama said, according to the article. “I know that’s true in the African American community, for example.” Instead, he endorsed civil unions, a designation that did not exist in 1996.

That strategy later evolved to include saying he personally didn’t believe in gay marriage, but opposed efforts to ban it. At that time, there was some resonance to the argument that in order to help gay people, Obama needed to get elected, even if that meant taking a lukewarm porridge position on gay marriage.

At Monday’s White House briefing, Johnson asked Carney about it again, and among the “we love the gays” boilerplate we have come to know and love, Carney confirmed that it was his understanding that the President had completed the questionnaire himself, and Carney acted as though this had always been common knowledge: (transcript via The Washington Blade, additional transcription by Tommy Christopher)

Carney: Chris, I think you know because you’ve read it multiple times since then that we’ve corrected it beginning Friday that he — that that is not the case, that he was mistaking with another questionnaire.

The president’s position on gay marriage has been clear since ’08 — is clear, again, since he’s been president.

Q: Jay, will you clarify whether the ’96 survey was signed by Obama?

Carney: It’s my understanding that it was.

Blade: But did the president, in fact, support same-sex marriage in 1996?

Blade: On Thursday, the president is attending an LGBT fundraiser in New York. This state could have same-sex marriage by the end of this week. It’s very possible. Next week, he’s hosting a Pride reception here at the White House. Isn’t the president selling this audience short by saying he supports them and wants their money for his re-election campaign, but also saying at the same time he does not support their right to marry?

Johnson also asked Carney if the President might share his “evolution” on marriage equality at an upcoming LGBT event, to which Carney replied, “I don’t anticipate that.”

Here’s the problem: the President’s views are clear; as I told Carney a few weeks ago, any reasonable person would conclude, from his words and actions, that President Obama believes in the right of same sex couples to marry, yet he still has not said so, publicly. It’s not 2008 anymore, and while the entire 2012 GOP field (save Ron Paul and Herman Cain) hasn’t progressed, the rest of the country has. For the first time, a majority of Americans support marriage equality, and civil unions have become the 8-track tape of gay rights.

The Democrats no longer have a filibuster-proof majority, and no chance to repeal DOMA, so this is no longer a strategic fight. It is a fight for the hearts and minds of those who still don’t grasp the inequity of second class citizenship, many of whom, as Don Lemon pointed out, are part of a key Obama constituency.

It’s a fight for the hearts and minds of those Democrats who are still stuck in Clinton triangulation mode.

It’s also a fight for the hearts and minds of the tens of millions of LGBT people, and those who love them, who are encouraged by the strides that the President’s press team rattles off, but who are confused by his refusal to stand by them and say, “I believe you are equal.”

It’s a fight for the hearts and minds of all the kids who really need to hear him say that, the kids we keep telling, “It gets better.”

Nobody believes that the President is sitting around, thinking and thinking about this issue, unable to push that boulder over the hill. As Carney’s answers demonstrate, it could not be more obvious that President Obama believes in marriage equality. With so many people who need to hear it, why won’t he say it?