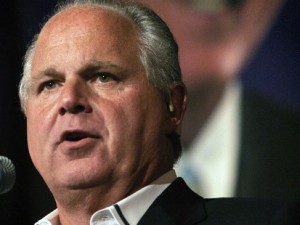 As former Time magazine reporter Jay Carney emerges from the Office of the Vice President into the glaring spotlight of White House Press Secretary, there will undoubtedly be an effort to capitalize on the right’s contempt for mainstream journalism by demonizing Carney, and his former colleagues, in one fell swoop. Carney is the first mainstream reporter (the late Tony Snow was an anchor and commentator) to hold the post since the Gerald Ford administration.

Right-wing radio host Rush Limbaugh provided the blueprint for this effort back in 2006, when he offhandedly slammed Carney and his wife, ABC News National Correspondent Claire Shipman, as “slave-owner and husband.”

Limbaugh’s contempt for what he calls the “drive-by media” long predates the emergence of anti-“lamestream”er Sarah Palin as the figurehead of a cresting movement to de-legitimize journalism, so it’s no surprise that Carney would have, at some point, wound up in Limbaugh’s sights.

Still, Carney may prove difficult for the right to pigeonhole, especially when you consider that Redstate chief and CNN contributor Erick Erickson said, in 2008, that he is “a big fan of (Carney’s) work since 2000,” and upon Carney’s shift to the VP’s office, reminded readers that “Jay Carney is an awesome reporter. He always played it middle of the road and tried to get both sides,” adding (because the default position for conservatives is that any reporter who doesn’t work for World Net Daily or National Review is automatically biased), “…but his biases were always to the left.”

The Limbaugh quote offers another treat for liberals with an unquenched outrage jones: Rush’s mini-rant earned him the Worst Person award on the now-defunct Countdown with Keith Olbermann. In the era before “new tone,” Olbermann suggests Limbaugh get his meds adjusted.