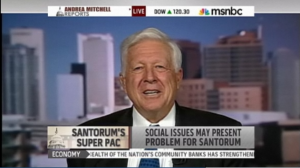 Rick Santorum backer Foster Friess raised more than a few eyebrows yesterday when he told MSNBC’s Andrea Mitchell that, back in his day, “they used Bayer aspirin for contraceptions. The gals put it between their knees and it wasn’t that costly.”

Now — as Santorum tries to distance himself from Friess’ comment — the businessman has taken to his blog in order to explain that had been joking, as well as to apologize to anyone who may have been offended:

After listening to the segment tonight, I can understand how I confused people with the way I worded the joke and their taking offense is very understandable. To all those who took my joke as modern day approach I deeply apologize and seek your forgiveness. My wife constantly tells me I need new material—she understood the joke but didn’t like it anyway—so I will keep that old one in the past where it belongs.

He also took the opportunity to discuss Santorum’s policies concerning contraception — policies people may have misunderstood thanks to the aspirin kerfuffle:

He publicly stated he would not ban contraception; he has said if he were a member of a state legislature which introduced such a bill, he would vote against it; and he has incurred the wrath of his more conservative friends for voting to fund contraception to fight AIDS in Africa.

His 75% favorables include a lot of women who appreciate his clear stance on contraception that they favor. His strong personal convictions on the subject are well-known and he has never attempted to turn his personal preference into public policy unlike the stand President Obama has taken in forcing Catholic institutions to embrace his world view.