Dobbs Agrees With Trump on His ‘Unfair’ Media Coverage: ‘You Are Besieged From Every Direction’
Video

Dobbs Agrees With Trump on His ‘Unfair’ Media Coverage: ‘You Are Besieged From Every Direction’ 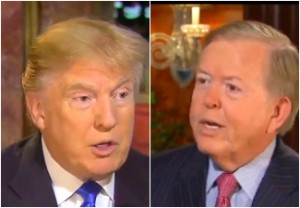 Fox Business host and incorrigible Trump fan Lou Dobbs interviewed the presumptive GOP nominee and expressed his sympathy for how hard a time Donald Trump was having, suffering at the hands of both the media and both major political parties.

“You are besieged from every direction,” Dobbs said to kick off his interview, which aired Tuesday evening. “You’re in a fight with the Republican — part of the Republican establishment, the Democratic establishment, the party, and the national liberal media. I’ve never seen the like of it and I’ve been covering presidential politics, one way or the other, for 40 years.”

“You’re right. As we were saying, Ronald Reagan went through a lot, but people say it wasn’t as bad as this,” Trump agreed. “And other than that I have no other analogy.” Trump added that the “dishonesty of the media is beyond belief. It’s beyond belief.”

“I will tell you,” Trump continued, “I’ve never seen more unfair press coverage.” He specifically cited a New York Times story on the candidate’s history of sexism and misogyny. Dobbs said that the paper “immediately retracted and corrected everything.” In fact, they didn’t retract the story or correct anything in it, and Trump never even asked them to do so. (One of the sources for the story came forward after it was published to say she had been flattered, not offended, by the behavior she had described to the Times reporters.)

Trump concluded the interview by telling Dobbs, “I’ll be out there working — and watching you.”