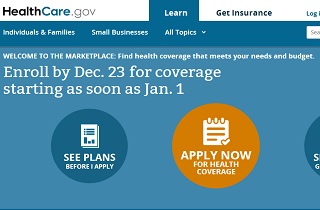 On Wednesday morning, the Department of Health and Human Services released its December enrollment report for Obamacare enrollments, covering the period from October 1 through November 30, which was the Obama administration’s advertised deadline for a reasonably functioning website. The report shows that, to date, 364,682 Americans selected plans from the state and federal Marketplaces, including the 106,000 who signed up in October. Additionally, 803,077 Americans were determined or assessed to be eligible for Medicaid or CHIP during that period.

The increase in enrollments for November is encouraging when compared to the dismal October rollout, but the real test will be how enrollments trend following that November 30 deadline for the website, and before the Dec. 23 deadline for coverage effective December 1. On that count, the report notes that 1.9 million people have signed up at the exchanges, but not selected a plan, and that there have been more than 39.1 million visitors to the state and federal exchanges, and more than 5 million calls to the respective call centers, indications that demand remains high.

Nearly 365,000 Americans selected plans in the Health Insurance Marketplace in October and November

1.9 million customers made it through the process but have not yet selected a plan; an additional 803,077 assessed or determined eligible for Medicaid or CHIP

Since October 1, 1.9 million have made it through another critical step, the eligibility process, by applying and receiving an eligibility determination, but have not yet selected a plan. An additional 803,077 were determined or assessed eligible for Medicaid or the Children’s Health Insurance Program (CHIP) in October and November by the Health Insurance Marketplace.

“Evidence of the technical improvements to HealthCare.gov can be seen in the enrollment numbers. More and more Americans are finding that quality, affordable coverage is within reach and that they’ll no longer need to worry about barriers they may have faced in the past – like being denied coverage because of a pre-existing condition,” Secretary Kathleen Sebelius said. “Now is the time to visit HealthCare.gov, to ensure you and your family have signed up in a private plan of your choice by December 23 for coverage starting January 1. It’s important to remember that this open enrollment period is six months long and continues to March 31, 2014.”

The HHS issue brief highlights the following key findings, which are among many newly available data reported today on national and state-level enrollment-related information:

The report groups findings by state and federal marketplaces. In some cases only partial datasets were available for state marketplaces. The report features cumulative data for the two month period because some people apply, shop, and select a plan across monthly reporting periods. These counts avoid potential duplication associated with monthly reporting. For example, if a person submitted an application in October, and then selected a Marketplace plan in November, this person would only be counted once in the cumulative data.

Here’s the full report, from HHS: