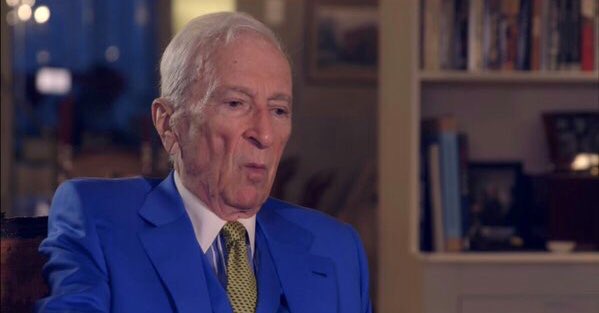 Famed author and journalist Gay Talese has a message for all the alleged victims of actor Kevin Spacey’s sexual misconduct: “Suck it up.”

In a Vanity Fair piece, Talese expressed interest in profiling the disgraced American Beauty and House of Cards star. The writer — who is famous for his flagship profiles “Frank Sinatra Has a Cold” and “The Silent Season of a Hero” — reportedly said to Vanity Fair, “I would like to talk to Kevin Spacey.”

Talese went on to make the shocking “suck it up” remark about the Hollywood star’s alleged victims — some who claim to have been as young as 14-years-old when Spacey made sexual advances toward them. “I feel so sad, and I hate that actor that ruined this guy’s career. So, okay, it happened 10 years ago… Jesus, suck it up once in a while!” Said Talese.

Adding, “I would like to ask [Spacey] how it feels to lose a lifetime of success and hard work all because of 10 minutes of indiscretion 10 years or more ago.”

His defense for Spacey — who is currently away from the film industry seeking “treatment” — was the classic “whom among us hasn’t” excuse.

Since the initial allegation against Spacey, his accusers have reached double-digits, as eight Netflix employees, a then 15-year-old actor, Harry Dreyfuss, and others have all come forward against him. Additionally, his current primary project — Netflix’s award-winning drama House of Cards — has completely cut ties with Spacey.