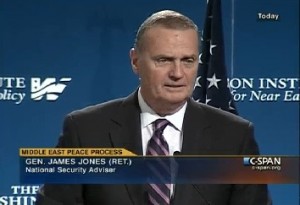 National Security Advisor General James Jones (Retired) opened his remarks to a pro-Israel think tank last Wednesday with a joke about a Taliban fighter who receives his comeuppance from a pair of Jewish business owners. Politico reported that the joke was “left out” of the White House transcript of the event, and right-wing blogs are a-burnin’ with outrage. Jones’ joke may have been ill-advised, but there doesn’t appear to be any attempt by the White House to “scrub” it.

Here’s a clip of Jones’ warm-up to his speech at the Washington  Institute for Near East Policy. You can view the entire speech here, with Jones’ portion beginning at the 12:11 mark.

This doesn’t get the White House completely off the hook, since they did not label the transcript “as prepared for delivery,” but it does provide a certain amount of insulation from criticism. For very high-profile speeches like the State of the Union, the White House will release two transcripts, “as prepared” and “as delivered,” but not for most others.

In fact, the White House did send out excerpts of Jones’ remarks that day, and did mark them “as prepared for delivery.” It’s possible that whoever sent out the full transcript simply mixed up the “prepared” and “as delivered” remarks, or there might have been a problem transcribing the actual speech. This wouldn’t be the first time such a mix-up occurred.

On the other hand, critics of the administration could be forgiven a bit of skepticism here. At a time when a perception exists that US-Israeli relations are strained, perhaps ethnic humor isn’t the best choice for administration officials to try out. Although the joke falls far short of the outrage suggested by the right (the point of the joke is the Taliban fighter’s cleverly delivered comeuppance, not the “greed” of the merchants), it’s the kind of thing that takes longer than it’s worth to explain, and an unproductive distraction from much more important concerns.

I asked Robert Gibbs for a statement on this issue, and haven’t heard back yet.

Update: Jake Tapper reports that Abraham Foxman, national director of the Anti-Defamation League of B’nai B’rith, found the joke “inappropriate,” while an unnamed Jewish member of Congress advised everyone to “lighten up.”

Still no response from the White House, on Tapper’s end or mine.

Update 2: This isn’t the first Jones quip not to make it into a White House transcript. In March, Time reported that Jones joked aboard Air Force 1 that Hamid Karzai might not have been in the loop on President Obama’s surprise trip to Afghanistan:

Since the White House never sent out a transcript of the exchange, I have produced one below. It took place about an hour or so before we landed in Afghanistan.

REPORTER: When did Karzai learn that the president was coming?

JAMES JONES: That the president was coming?

ROBERT GIBBS: [Repeating question] When did Karzai learn that the president was coming?

JONES: I think, probably, right about now. [Laughter around the table.]

JONES: We’ll have to ask Ambassador Eikenberry, I think. I don’t know the answer to that.

Normally, the White House does release transcripts of AF1 press gaggles, but didn’t in this case. There was a pool report on the gaggle, by Wall Street Journal’s Peter Spiegel, but no mention of the joke:

Jones said POTUS would “engage” with Karzai on benchmarks. Please check against transcript, but some quotes:

POTUS will “engage President Karzai…to make him understand that in his second term, there are certain things that have been not paid attention to, almost since day one. That is things like…a merit-based system for appointment of key government officials, battling corruption, taking the fight to the narco-traffickers, which fuels, provides a lot of the economic engine for the insurgents.”

He also said they would dicuss the importance of the reintegration and reconciliation process. More to come.