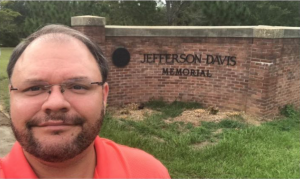 Ever since a white supremacist rally in Charlottesville killed one anti-racism protester and resulted in numerous racially charged, violent confrontations, the national dialogue around the existence of Confederate monuments has been reinvigorated.

And in another, related blast from the past, a GOP Georgia state representative, Jason Spencer, on Facebook appeared to threaten an African-American, Democratic former colleague with lynching when she criticized his support for Confederate monuments and called for their removal.

Spencer told former Rep. LaDawn Jones she wouldn’t be “met with torches but something a lot more definitive” if she continued to call for the removal of Confederate statues in south Georgia. Spencer added that “people in South Georgia are people of action, not drama” and said that some who don’t understand that “will go missing in the Okefenokee.”

“Too many necks they are red around here,” he added, as if the threat of lynching weren’t clear enough. “Don’t say I didn’t warn you about ’em.”

Jones has since responded by calling Spencer’s unhinged social media rant the threat of violence that it was, but is otherwise unconcerned — and as well she should be. Online threats of rape and violence, which are nothing new to female politicians and especially female politicians of color, typically spring from cowardly men living in their parents’ basements.

In either case, Spencer’s threats simultaneously remind us of the history of racism and violence meant to suppress African American political participation and existence as free people in the United States that Confederate statues represent, as well as the heartbreaking fact that this violent racism remains prevalent to this day.

For all the rallying cries of “heritage, not hate,” what too many Americans are ignoring is that that heritage — one paved with slavery, torture, rape, and a war for the right to own and objectify African Americans — is inextricably bound to racial hatred. And notably, statues don’t just commemorate history — they glorify it. Statues of Robert E. Lee, Jefferson Davis, and other heroes of the Confederacy are tributes celebrating men who fought, died, and killed to uphold a society in which black people to be used and abused.

That’s where the outraged cries for Confederate monuments to be dismantled are coming from — a desire to promote equality by taking down symbols that glorify inequality. And responses to these outraged cries — in this case, the threat to lynch an African-American woman for expressing a political opinion — speak volumes about how much more social progress still needs to be made.