Glenn Beck: Communists Will Say ‘Jesus Was A Marxist’ To Co-Opt American Holidays 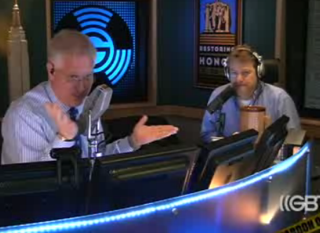 The Communist Party USA is the sort of fringe third party that rarely gets any attention in the national spotlight, but a recent speech by a party leader asserting that the group seeks to “reclaim” the Fourth of July as their holiday landed them squarely in Glenn Beck‘s crosshairs. On his radio program today, Beck played a clip of the speech and warned that, just as the Communists were trying “reclaim” Independence Day,” they were after American history.

Beck played a clip of a leader of the Missouri/Kansas Communist Party USA, speaking at a dinner in honor of American communist leader Herschel Walker. In it, the speaker complained that “the right wing has hijacked some of our holidays,” among them July 4th, and “they make it sound like we’re unpatriotic.” That comment was met with cackles all around the Beck studio, with Beck proclaiming they had “only been trying to destroy the American way of life since 1868” and that the communist holiday they should actually observe was “May Day, you communist freak.” Beck then complained, somewhat exasperatedly, that “you can say anything and get away with it,” using as an example a facetious claim that Benjamin Franklin was a woman.

They are doing it,” Beck asserted sternly amid the chuckles of his co-hosts. “They are doing it. ‘Jesus was a Marxist,'” he mocked, also highlighting comments by Al Sharpton claiming that Martin Luther King, Jr. was a Marxist and joking that Easter was a Communist holiday, too. “The bunny shares his eggs,” Beck argued, suggesting that the Bunny got all his eggs in the first place through “redistribution of eggs” from the chickens. It’s almost reminiscent of the famous “government with cows” analogies, except it’s with chickens, and Easter, and only communists. Then Beck turned, more seriously, to what he considered a progressive narrative that needed to be fought: “Michelle Obama said, ‘We have to change our history.'” That, he noted, was at the core of the Communist’s complaint, and what they shared with more mainstream groups.

The segment from Beck’s radio program below: