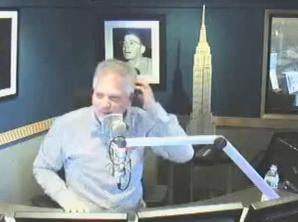 Glenn Beck was back from vacation today, on TV, radio and Twitter.

At the beginning of his radio show, Beck talked about his vacation, which he shared with another major news star – CBS Evening News anchor Katie Couric. But Beck didn’t get an invite to her New Year’s party, and he wasn’t happy.

The Right Scoop has the video of Beck’s first few minutes on air today. He says Couric was “staying right next to me,” but didn’t know until he encountered her on the beach. “I’m on the beach with my kids, and this woman comes up to me wearing a hat and glasses, and so I don’t recognize her, and I don’t usually see Katie Couric in a swimsuit,” he said.

Still not recognizing her, she starts yelling his name and Beck says he thinks “Oh jeez, crazy lady on the beach.” It should be noted that, at the very least, Couric and Beck spent an hour together in September for the premiere of Couric’s web show, @KatieCouric (also, they share a publicist). So eventually, Beck recognized her, but then he told his radio audience something else.

“On New Years Eve she had a party and I wasn’t invited,” he said, later joking that he yelled “Couric keep it down, we’re trying to watch Cops over here!”

This led to a “dinner discussion” between Beck and his family, over whether he should have Salahi’ed the event. He says his daughter endorsed the idea. “This is my daughter’s reasoning,” he said. “We couldn’t just crash the party because that would be rude. And she said ‘More rude than not inviting you to the party?'”

If he crashed, he would be wrong, but Couric couldn’t throw him out because “then she’d have two wrongs against your one wrong.”

Is any of this real? Who knows – as unpredictable and brash TV Glenn Beck can be, Radio Glenn Beck is even wilder. Earlier he described a “major news organization” that called to ask if he had died in a plane crash, but never identified which organization that was. Either way, it’s an entertaining few minutes, and you get to see some video of Beck to prepare you mentally for 5pmET tonight. Glynnis is pumped.