Godfather Rupert Murdoch Wants Everyone On Board His Paid Content Train 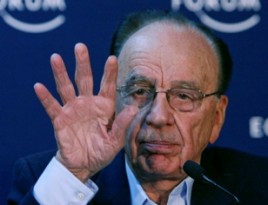 Ever since Rupert Murdoch announced that he was going to institute a pay-for-content policy on everything he publishes the media world has been much-a-chatter over whether Rupe publishes anything other than the Wall St. Journal that people would actually be willing to pay for. Solution? Make everyone get on board your paid content train…someone must have something that’s worth shelling out for! This from today’sL.A.Times:

Chief Digital Officer Jonathan Miller has positioned News Corp. as a logical leader in the effort to start collecting fees from online readers because of its success with the Wall Street Journal Online, which boasts more than 1 million paying subscribers. He is believed to have met with major news publishers including New York Times Co., Washington Post Co., Hearst Corp. and Tribune Co., publisher of the Los Angeles Times.

Sound familiar? Steve Brill is attempting to do something along similar lines with his Journalism Online initiative, which announced the other day that 506 publications had signed letters of intent to become affiliates. However the fact that News Corp has apparently been in touch with both Hearst and the Washington Post Co. suggests they may also be interested in bringing magazines on board. The fact they have been meeting with the New York Times Co., well that just sounds like the media version of a Vito Corleone calling for a meeting of the Five Families to put an end to the violence (in this case, the freebies). You know: “It’s not like the Old Days, when we can do anything we want.”