GOP Congressman: Obama Is ‘Begging to Be Impeached’
Audio

GOP Congressman: Obama Is ‘Begging to Be Impeached’ 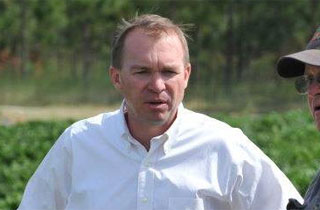 At the moment, the word “impeachment” is verboten among the GOP, after they realized that the Democrats were making serious fundraising dollars by playing off fears that Barack Obama would be impeached. In fact, the GOP is avoiding the word so much that as of last week, they’ve only mentioned it 4 times on the House floor, compared to the Democrats’ 86 mentions of the i-word.

“[The Democrats] would love to be able to talk about impeachment and immigration between now and the November elections, instead of talking about jobs, and the economy, and health care,” he gloated to WQSC 1340 on August 1st. “They are desperate to change the dialogue, which is exactly why you heard the president starting to talk about his amnesty cause he’s begging to be impeached.”

Mulvaney did say that the GOP shouldn’t “fall into a trap when the guy absolutely wants to be impeached,” because that means the Democrats could turn that into a fundraising payload, but he did say that, maybe, eventually, he could impeach Obama if he actually violated the Constitution: “It’s my job to try and impeach the President, Republican or Democrat. That’s the rules.”