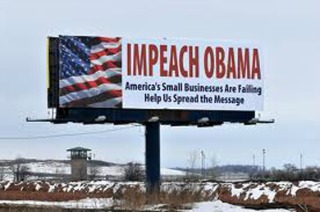 Republican Sen. Tom Coburn (R-OK) warned on Wednesday in a speech at a local Civic Center that President Barack Obama was veering “perilously close” to the standards of conduct necessary to be impeached. In a video uncovered by BuzzFeed, Coburn warned that the Congress may have to act if Obama does not alter course in the coming months.

“What you have to do is you have to establish the criteria that would qualify for proceedings against the president and that’s called impeachment,” Coburn said in response to a question. “That’s not something you take lightly and you have to use a historical precedent of what that means.”

“I think there’s some intended violation of the law in this administration, but I also think there’s a ton of incompetence of people who are making decisions,” Coburn continued.

When pressed by a constituent to explain why the president is not forced by law to behave in the same way that average Americans are by the Internal Revenue Service, Coburn said he agreed.

“My little wiggle out of that when I get that written to me is I believe that needs to be evaluated and determined, but thank goodness it doesn’t have to happen in the Senate until they’ve brought charges in the House,” he said. “Those are serious things but we’re in a serious time.”

“I don’t have the legal background to know if that rises to high crimes and misdemeanor but I think they’re getting perilously close,” Coburn added.

The Oklahoma Senator called Obama a “personal friend” and sympathized with his “difficult position.” However, Coburn noted that it was a position of his own making.

“I think we’re going to have another constitutional crisis in our country in terms of the presidency,” he concluded.