Guess Who Surprised Joy Behar For Her Birthday Bash? ‘You Need to Show Me Your Birth Certificate’
video

Guess Who Surprised Joy Behar For Her Birthday Bash? ‘You Need to Show Me Your Birth Certificate’ 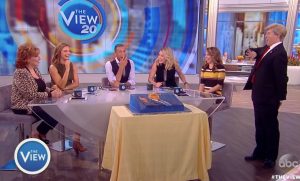 The ladies of The View — with the addition of CNN’s Don Lemon — celebrated Joy Behar‘s birthday today in pretty epic fashion. Before ending the episode, the crew surprised the comedic vet with a walk-on from the GOP nominee himself… well, sort of.

UCB’s Anthony Atamanuik, whose turn as a Donald Trump impressionist this past year has earned critical reviews at every turn, came out with a massive Trump cake to present to Behar. He managed a few pretty awesome jokes in-character too.

And for a little insider baseball, Atamanuik hysterically came out and immediately greeted Jedediah Bila and said, “By the way, Roger Ailes says hello.”

“Before I can give it to you, you need to show me your birth certificate,” he said to Behar with Don Lemon and company cracking up at the table. Check out his spot-on impression of Trump’s speaking style in this bit:

…and scene. Watch above via ABC.
—