Half-Baked ‘Hillary Doesn’t Tip’ Narrative Now on Display — but Who Tips at Chipotle?

Half-Baked ‘Hillary Doesn’t Tip’ Narrative Now on Display — but Who Tips at Chipotle? 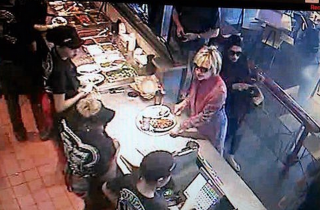 The Hillary Clinton media onslaught we’re seeing this week is a combination of three things:

1) It’s a relatively slow news cycle (Cuba being removed from the terror list and the murder verdict of a former NFL backup tight end aren’t really resonating with the viewing public).

2) Brand names like “Clinton” are easier to sell than newer candidates (“new” as in hasn’t been a public figure for the past 24 years). Although if I’m Hillary Clinton and I’m trying to rebrand myself as a fresh candidate with ideas to make America’s future better, I’m probably not naming my campaign van after one from a cartoon that aired during the Nixon administration. Scooby Scooby Doo, where are you?

3) An increasingly-polarized media already taking sides in a presidential election that’s a mere 571 days away.

Of the three points, the last is responsible for fueling the constant coverage the most. In a related story, Chipotle sales have likely tripled in the past three days. And speaking of Chipotle, the top story on the Daily Caller today is a story by Chuck Ross breaking down Clinton’s past of treating nickels like manhole covers when it comes to tipping wait staff at places like the aforementioned chain. Tipgate, of course, originally was reported by Bloomberg News, which revealed the former Secretary of State did not leave a tip during that monumental trip to Chipotle earlier this week. That said, The Caller is simply expanding the Bloomberg News isolated narrative to show, in fact, this whole tipping issue has been Clinton’s M.O. for years… going back to an “incident” in 1994 during her time as first lady. And yes, that last sentence was somehow written with a straight face.

The implication? Clinton can’t be for the little guy when she’s stiffing them when it’s time to throw a little extra in for the effort. To quote another cartoon from years past: Good grief.

And you still want to know why so many people loathe the media? It’s because of stories like this.

Here’s some breaking news: Almost nobody tips at fast food restaurants. This has already been debated appropriately enough in Quentin Tarantino‘s classic Reservoir Dogs. For those who somehow missed this classic scene, here you go (some language edited for obvious reasons). The part about McDonalds vs. standard restaurants is particularly poignant:

Mr. Blue: You know what these chicks make? They make s**t.

Mr. Pink: Don’t give me that. She don’t make enough money, she can quit.

Nice Guy Eddie: I don’t even know a (expletive removed) who’d have the balls to say that. Let me get this straight: you don’t ever tip, huh?

Mr. Pink: I don’t tip because society says I have to. Alright, I mean I’ll tip if somebody really deserves a tip. If they put forth the effort, I’ll give them something extra. But I mean, this tipping automatically, it’s for the birds. As far as I’m concerned they’re just doing their job.

Mr. Pink: Jesus Christ I mean, these ladies aren’t starving to death. They make minimum wage. You know, I used to work minimum wage and when I did I wasn’t lucky enough to have a job that society deemed tipworthy.

Mr. Blue: You don’t care if they’re counting on your tips to live?

Mr. Pink: [rubbing his middle finger and thumb together] You know what this is? The world’s smallest violin playing just for the waitresses.

Mr. White: You don’t have any idea what you’re talking about. These people bust their ass. This is a hard job.

Mr. White: Waitressing is the number one occupation for female non-college graduates in this country. It’s the one job basically any woman can get, and make a living on. The reason is because of their tips.

Mr. Pink: I mean I’m very sorry the government taxes their tips, that’s f***ed up. That ain’t my fault. It would appear to me that waitresses are one of the many groups the government (sexual act) on a regular basis. If you show me a piece of paper that says the government shouldn’t do that, I’ll sign it, put it to a vote, I’ll vote for it, but what I won’t do is play ball. And this non-college bull**t you’re givin’ me, I got two words for that: learn to f***n’ type, ’cause if you’re expecting me to help out with the rent you’re in for a big f***in’ surprise.

Mr. Orange: He’s convinced me. Gimme my dollar back!

Rent it if you haven’t seen it.

Analysis of the Clinton campaign launch and the role of social media over the next 571 days? Go for it. The differences on taxation, health care, foreign policy, immigration, entitlements, etc? Have at it. Servers destroyed or the Clinton Global Fund still accepting foreign donations? All in play. Speculation over running mates? All in good fun.

But tipping history? And one based on a story around a tip that wasn’t left by one candidate at a restaurant very few tip in the first place?

Please… either save it as story #74 that day or kill it. It’s Harry Reid lying about Mitt Romney’s taxes all over again.

But if that’s your lead — and you can absolutely believe this will be a hot topic today on talk radio and other blogs — well, we’ve really got problems.