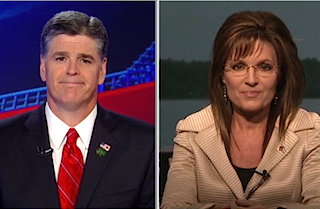 Sean Hannity has come to Sarah Palin’s defense after the former Alaska governor told an NRA rally over the weekend that if she were president, America’s enemies “would know that waterboarding is how we baptize terrorists.” Hannity agreed with Palin on his radio show, saying, “That’s the way America rolls.”

“Well what do you want to do with terrorists?” Hannity asked any critics out there who disagreed with Palin’s sentiments. He laid out a hypothetical scenario where someone kidnapped his three children and he had the chance to interrogate them into telling him where they were. “Would you want to baptize by waterboarding the guy who took your three children?” he asked. “I think would. As a matter of fact, it wouldn’t really be much of a question. I think I’d baptize them again and again and again until I found out where my kids are.”

The host predicted that all those liberals out there listening to him would also “do whatever it took” to get their children back. So, he wondered, why should it be any different with terrorists?

The day after Palin made her comments, she told a reporter for NBC News that she would “absolutely” say the same thing again. “Terrorists who want to annihilate Americans, innocent Americans, our children — whatever it takes to stop them,” she said. “If I were in charge, I’d be stoppin’ em.”

Watch Palin’s original remarks below, via the NRA: