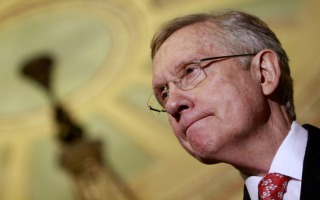 Senate Majority Leader Harry Reid (D-NV) is not satisfied with GOP presidential nominee Mitt Romney’s release of his 2011 tax return and a summary of his last 20 years of tax returns. After claiming several times since the summer that it was possible that Romney had paid nothing whatsoever in taxes, Reid is now claiming that “creative accounting” is responsible for Romney’s returns which show he paid an average of 20.2 percent in taxes over the last two decades.

In a statement released by Reid’s office, he accuses Romney’s accountants of manipulating the Republican presidential candidate’s returns:

The information released today reveals that Mitt Romney manipulated one of the only two years of tax returns he’s seen fit to show the American people – and then only to ‘conform’ with his public statements. That raises the question: what else in those returns has Romney manipulated? We already know Romney has money in tax havens in Switzerland, Bermuda and the Cayman Islands. What we don’t know is why he refuses to be straight with the American people about the choices he’s made in his financial life. When will the American people see the returns he filed before he was running for president? Governor Romney is showing us what he does when the public is looking. The true test of his character would be to show what he did when everyone was not looking at his taxes.

“It’s also galling to see the creative accounting Mitt Romney applied to his own tax returns only days after learning of his insulting comments that seniors, soldiers and hard-working parents don’t pay enough taxes,” Reid said in the statement. “Once again, we see Mitt Romney is out of touch with middle class families, who don’t have the luxury of accounting wizards and foreign tax shelters. It’s obvious he believes in two sets of rules: one for him, and one for the middle class.”

Reid goes on to warns, “despite the fiscal cliff looming in just over three months,” Romney still refuses to release details of his returns.