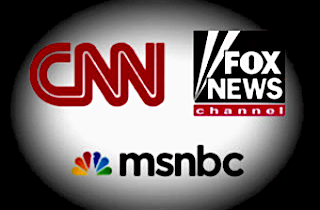 If there was ever a doubt that the corporate media is an arm of corporate politicians, the last five days is your answer.

Initial breathless coverage of Donald Trump‘s vile and predatory comments have led to 24/7 wall-to-wall coverage of his Twitter diarhea against the Republican Party, and, gasp!, what does it mean for the future of the GOP?

In between, there’s been barely any coverage of the thousands of emails hacked from John Podesta, Hillary Clinton‘s campaign chairman, which show a candidate whose policies and image were largely molded like clay in real time.

Between Wall St. speeches showing her acknowledging talking one way to bankers and another to the general public; Clinton boasting about pushing fracking around the world as Secretary of State; and emails showing the Clinton’s doing favors for “friends of Bill” rather than others in need following the Haiti earthquake, you’d think this would be all over cable news and print, right?

Unsurprisingly, the mainstream media has mostly buried it; it makes sense; since many of the emails show “journalists” working hand in hand with the Clinton campaign.

Example A is The Hill columnist Brent Budowsky. In an email dated May 2015, Budowsky made a column proposal to Podesta, outlining that he’d be urging Senator Elizabeth Warren to give a “big endorsement” to Clinton and a keynote speech at the DNC.

But not wanting to upset his puppet master, Budowsky asked, “Would that give you a problem?” He concluded: “I won’t tell anyone and I won’t include it, deferring to you…”

Any thoughts, The Hill?

Next up is CNN Politics Producer Dan Merica, who, apparently, should put some fear into Bill Clinton. “They are basically courting each other at this point,” Clinton press secretary Nick Merrill wrote regarding the softball interview dalliance Merica and Clinton engaged in.

OBVIOUSLY, this is all over CNN today.

As I first reported Tuesday, former CNN contributor Donna Brazile, who is now the interim chairwoman of the DNC, was also a star of the latest WikiLeaks release, sending an email on March 17th, 2016 with subject line, “From time to time I get the questions in advance.”

This comes on top of a separate email Brazile sent to Podesta around New Year’s, promising to be “your biggest surrogate” once Clinton had the nomination wrapped (kind of presumption?). This is the same Brazile who, as a CNN contributor at the time, espoused her need to stay neutral in the primary due to her dual role as DNC Vice Chair.

Brazile offered a somewhat absurd denial to the death penalty email she sent to the Clinton campaign, claiming she was actually sending a question she was going to be asked for a panel she would be on.

And I’ve got a bridge to sell you. I’m sure Anderson Cooper will be doing a “Keeping Them Honest” segment immediately.

CNBC moderator John Harwood is also exposed in the latest round of leaks, seeming to be more of a silent cheerleader for the Clinton campaign than a journalist. Following the email scandal breaking, Harwood emailed Podesta a tweet he penned essentially saying nothing to see in regards to the emails.

He also wrote an email praising Clinton’s “good letter” to the New York Times editor and praised her interview with Andrea Mitchell.

“She looked so much more comfortable talking to [Mitchell] today than to [CNN’s Brianna Keilar] a few weeks ago,” he wrote in an email to Pedesta.

The New York Times also bent over backwards for the Clintons dating further back than Hillary’s second presidential run; columnist Nick Kristoff fed Bill Clinton questions ahead of their 2011 interview on international issues.

This pattern of media “courting” Clinton and otherwise falling all over themselves to help the candidate goes against Basic Journalism 101. Sure, corporate media prides itself on having access to campaigns and candidates’ advisors, but what’s the ultimate price of said access?

A watering down of adversarial journalism—you know, what you’re supposed to do to hold the powerful accountable.

Donald Trump’s disgusting comments and potential predatory behavior deserves fierce and significant coverage. But the media’s “nothing to see here” coverage of Clinton is an embarrassment to journalism.

I guess when you’re the ones who’d be indicted by reporting something, it just falls out of the rundown.

— —
Jordan Chariton is a Politics Reporter for The Young Turks, covering the presidential campaign trail, where he’s interviewing voters on both sides. He’s also a columnist for Mediaite and here’s his latest column. Follow him @JordanChariton and watch videos at YouTube.com/tytpolitics.
— —
This is an opinion piece. The views expressed in this article are those of just the author.