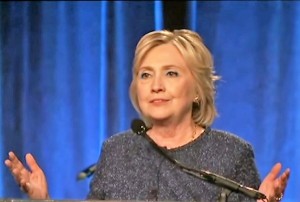 Former Secretary of State and current Democratic presidential nominee Hillary Clinton addressed the controversy surrounding her remark that half of Donald Trump’s supporters are part of a “basket of deplorables,” releasing a statement that some are characterizing as an apology, but which almost reads more like a second attack. Clinton’s only regret, according to her statement, was in quantifying the “deplorables” as half. She was very clear that she did not regret the rest:

Last night I was ‘grossly generalistic,’ and that’s never a good idea. I regret saying ‘half’ — that was wrong.

But let’s be clear, what’s really ‘deplorable’ is that Donald Trump hired a major advocate for the so-called ‘alt-right’ movement to run his campaign and that David Duke and other white supremacists see him as a champion of their values. It’s deplorable that Trump has built his campaign largely on prejudice and paranoia and given a national platform to hateful views and voices, including by retweeting fringe bigots with a few dozen followers and spreading their message to 11 million people.

I won’t stop calling out bigotry and racist rhetoric in this campaign,” she went on, but she offered an olive branch of sorts to downscale Trump voters. “I also meant what I said last night about empathy, and the very real challenges we face as a country where so many people have been left out and left behind. As I said, many of Trump’s supporters are hard-working Americans who just don’t feel like the economy or our political system are working for them. I’m determined to bring our country together and make our economy work for everyone, not just those at the top.

“I won’t stop calling out bigotry and racist rhetoric in this campaign.” —Hillary pic.twitter.com/C3Z7GybJ53

The Trump campaign has leapt on the controversy, but it appears that Hillary, at least partially, is leaning into it. This statement doesn’t even say if she thinks “half” was too high or too low an estimate.

Here’s the full context of what Hillary said:

You know, just to be grossly generalistic, you could put half of Trump’s supporters into what I call the basket of deplorables. They’re racist, sexist, homophobic, xenophobic, Islamaphobic — you name it. And unfortunately there are people like that. And he has lifted them up. He has given voice to their websites that used to only have 11,000 people – now have 11 million. He tweets and retweets their offensive, hateful, mean-spirited rhetoric.

Now some of these folks, they are irredeemable, but thankfully they are not America.

But the other basket–and I know this because I see friends from all over America here–I see friends from Florida and Georgia and South Carolina and Texas–as well as, you know, New York and California–but that other basket of people are people who feel that the government has let them down, the economy has let them down, nobody cares about them, nobody worries about what happens to their lives and their futures, and they’re just desperate for change. It doesn’t really even matter where it comes from. They don’t buy everything he says, but he seems to hold out some hope that their lives will be different. They won’t wake up and see their jobs disappear, lose a kid to heroin, feel like they’re in a dead end. Those are people we have to understand and empathize with as well.

UPDATE – 4:15 p.m. ET: The Trump campaign has offered this response to Clinton’s walk-back.