Huckabee Has Questions About Feminism, Can’t Figure Out Topless Campaigns 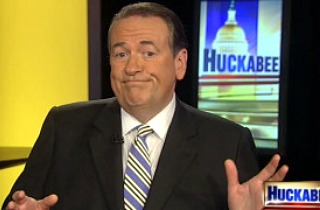 BuzzFeed unearthed a segment from The Huckabee Report on Thursday, where the 2016 Republican nominee bemoaned how hard it is to keep up with “what you’re supposed to believe to be a good feminist.” This was part of larger discussion on Mike Huckabee‘s confusion with what is considered “sexist”, and with a women’s campaign allowing them to “walk around shirtless, the way some men do.”

In January, Huckabee discussed how a feminist campaign was declaring a major victory over “media sexism” following a decision from British tabloid The Sun to remove their usual page featuring topless female models. Huckabee then voiced his trouble reconciling the event with a campaign by GoTopless, where women are “filling the internet with topless photos of themselves, all in the name of fighting sexism and inequality.”

Huckabee could not see the difference of The Sun‘s objectification of women for it’s male readership with the choice for women to be topless for their own reasons. “Are topless photos of women an offensive display of sexism, or an empowering display against sexism,” asked Huckabee. “I have a feeling most men don’t care much either way.”

Huckabee then concluded that women must be showing their breasts in order to demand equality with men who don’t wear shirts: “Just tell the men to put on a darn shirt when they go out in public.”

This is the second Mike Huckabee clip BuzzFeed has brought to public attention this week. On Tuesday, a video of Huckabee surfaced where he described how transgender people have placed the religious “under threat”, ending the talk with a joke about wishing that he claimed to be transgender in his youth in order to shower with girls in high school.