Huckabee: Michael Brown Would Be Alive if He Wasn’t Acting Like a ‘Thug’
VIDEO

Huckabee: Michael Brown Would Be Alive if He Wasn’t Acting Like a ‘Thug’ 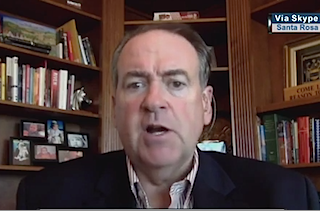 During an appearance on NewsmaxTV’s “America’s Forum” show Wednesday, Fox News host and former Arkansas Governor Mike Huckabee shared his strong opinions on the aftermath of the Ferguson grand jury decision, including what he thinks of St. Louis Rams players and members of Congress who did the “hands up, don’t shoot” gesture in protest of the Michael Brown shooting. “This is not only foolish and dangerous, but is really on the verge of anarchy,” he said.

“Well, first of all, I found it just incredibly dangerous that you had members of Congress, on the floor of Congress, holding up their hands in the ‘hands up, don’t shoot’ position, as if to say that somehow that is gonna get you shot,” Huckabee said, perhaps not fully understanding the symbolism of the gesture in question.

“I’m gonna tell you something,” Huckabe said, “what gets you shot is when you grab a police officer’s gun, and you lunge at him, and you try to hit him in the face. And this nonsense that — telling young people ‘don’t hold up your hands, ‘cuz thats gonna get you in trouble,’ and instead I guess what they’re teaching ‘em is go loot a store, beat up a cop, reach for his gun, hope you get it before he does.”

“This is not only foolish and dangerous, but is really on the verge of anarchy,” Huckabee continued. “And I’m just disgusted that you have NFL players, politicians, and others who, no matter what the evidence reveals, no matter how many sworn testimonies show that Darren Wilson, who, you know — it’s a tragedy that the young man got shot, but this is a young man who had just roughed up a store owner, just robbed a store, and now he’s going after a cop’s gun.”

He added, “It’s a horrible thing that he was killed, but he could have avoided that, if he behaved like something other than a thug.”

Watch video below, via NewsmaxTV (Ferguson comments begin at 5:00):