Huckabee Predicts Benghazi Will Be Obama’s Watergate: ‘This President Will Not Fill Out His Full Term’
audio

Huckabee Predicts Benghazi Will Be Obama’s Watergate: ‘This President Will Not Fill Out His Full Term’ 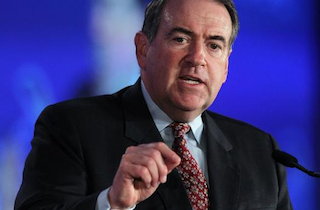 On his radio show on Monday, Mike Huckabee predicted that President Obama will not complete his second term due to the administration’s handling of the attack on the U.S. consulate Benghazi. Comparing it to Watergate, Huckabee asserted the Benghazi “cover-up” is “more serious.”

“I believe that before it’s all over, this president will not fill out his full term,” the former Arkansas governor posited. “I know that puts me on a limb, but this is not minor. It wasn’t minor when Richard Nixon lied to the American people and worked within those in his administration to cover up what really happened in Watergate. But, I remind you, as bad as Watergate was — because it broke the trust between the president and the people — no one died. This is more serious because four Americans did in fact die.”

Huckabee prefaced his prediction by noting that it would not be case if the Democrats take control of the House next year while maintaining control of the Senate. Should that occur, Democrats “won’t let it happen” — not only because they’re interesting in protecting the president, but also because they want to protect their party.

The administration’s “very, very deliberate attempt to mislead this country and its people” will be be revealed, Huckabee argued. “The highest levels of people in the United States government all the way up to the president knew that what they did tell us was not true. […] And when the facts come out, they will not be able to stand. They will have lost the right to govern.”

“And before it’s over,” he concluded, “I don’t think this president will finish his term unless somehow they can just delay it in Congress past the next three and a half years.”