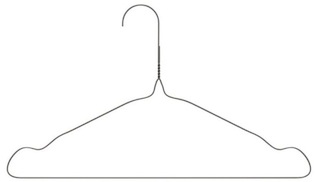 The Internet is a strange beast. It (and, yes, I am treating it like a sentient creature) is at once the perfect place for humor while also being the home of nonstop, humor-free outrage. Take for example the Newsweek tumblr. Ever since its creation, the site has been one of the perfect examples of old media understanding new, endearing and gaining subscribers with its light, snarky tone. However, that same tone that has gained it tons of followers that rarely ever read the actual magazine has also got it in a bit of trouble this morning after the tumblr began mocking the Huffington Post’s hanger-centric front page.

It would appear that people just aren’t in the mood to make light of abortion laws today.

As opposed to other days when abortion is hilarious.

Whatever, you know what I meant.

It all started with the Huffington Post adorning their front page with the headline “GOP PLATFORM: ANTI-ABORTION AMENDMENT, NO RAPE EXEMPTION” as well as an image of a coat hanger, the implications obvious. While the situation involving Rep. Todd Akin has completely reignited the whole “War on Women” debate regarding the GOP’s fairly unimpressive (read: disgusting, shameful, pathetic, hilarious if it weren’t true) record on women’s rights, some felt the image was too much. Perhaps sensing that undercurrent, the folks behind the Newsweek tumblr took a screenshot and posted it with the caption, “Whoa there, Huffington Post!”

However, that simple piece of snark was ripped to shreds pretty quickly by none other than insanely popular stand up Rob Delaney who reblogged the Newsweek post with this: 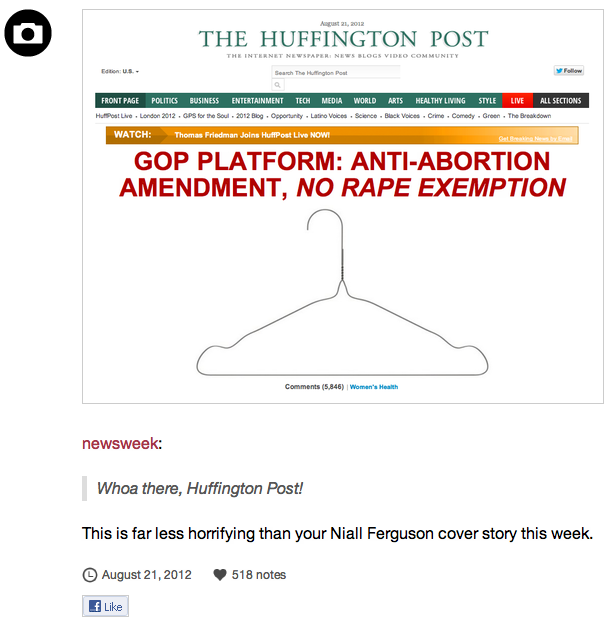 Delaney is of course referring to the current Newsweek cover story, “Hit The Road Barack,” which has been soundly criticized as being factually inaccurate (The Atlantic has a disturbingly lengthy list of the falsities). That already has the Internet (read: young, cool, Liberal types) wary about the magazine and, as we saw with that Progressive scandal last week, having an Internet celebrity like Delaney call you out can get pretty bad pretty quick.

To the credit of Newsweek and the people behind the tumblr, they stood their ground, responding to Delaney in another post:

Reeeeeally?! A coat hanger, signifying one of the most desperate and terrifying abortion methods that women have had to resort to over the years, is more horrifying than a known conservative’s case for firing the President?! There’s political discourse—and then there’s this. We’re biased, obvs, but gonna have to disagree with you on that.

Fair enough. But then they decided to get cheeky and defiant.

The Newsweek tumblr frequently does a cute thing where they change the mouse cursor when you go to the site. However, after the Delaney scrap, they decided to replace the current goofy cursor (a mustache) with…you guessed it…a coat hanger.

We’re retiring the mustache cursor for the day. Here’s our new one: a coat hanger 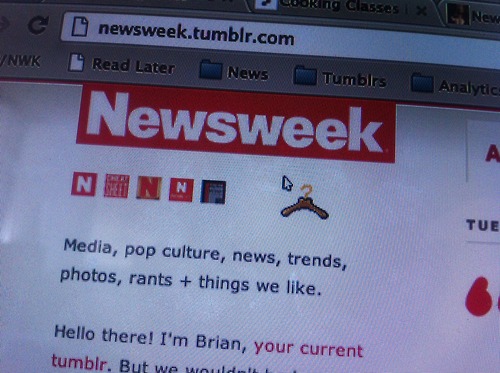 The response to this amongst the site’s followers has, so far, not been particularly positive. (those are literally the five most recent responses I found without any selective editing)

So what does this all mean? Well, nothing really. Just that, like I pointed out earlier and thanks to fun GOP guys like Akin, no one wants to laugh about abortion laws right now.

I guess I’ll have to change my whole stand up routine.