In Its Efforts to Rewrite Political History, Here’s Other Scandals HBO Should Make Movies About
Opinion

In Its Efforts to Rewrite Political History, Here’s Other Scandals HBO Should Make Movies About 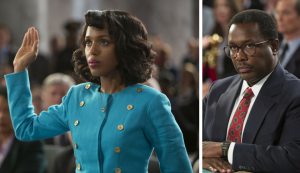 Confirmation — an HBO dramatization of the Clarence Thomas-Anita Hill Supreme Court hearings 25 years ago — aired for the first time last night on HBO. Notable controversy has followed the film for months now, so it was nice to finally see what all the fuss was about.

The easy column to write from here would be to point the finger at HBO for having a decided leftward-tilt when it comes to its attempts to rewrite political history. Forget easy, that’s just plain lazy. Because anyone who watches HBO original programming already understands the channel is (gasp) liberal. And as noted in this space more than a few times before, that content strategy is not only myopic, but bafflingly close-minded in a polarized society.

2008’s Recount by HBO Films is one example of history revision, a movie about the 2000 election recount told, as confirmed by star Kevin Spacey to then-MSNBC’s Keith Olbermann at the time, as a film, “from the Democratic point of view.” 2012’s Game Change is another clear example only because which major part of the book (as in 50 percent of it) wasn’t depicted (more on that in a moment). As for movies made about major Democratic figures by HBO, check out 2009’s By The People: The Election of Barack Obama (if infomercials kind of are your thing).

All of that said, am I saying don’t go ahead with a movie like Confirmation, which was very sympathetic to Ms. Hill, who during those 1991 Supreme Court hearings claimed Thomas sexually harassed her in the workplace? Of course not. It was major news event and one that captured the attention of the nation for weeks. But for those too young to remember or for those who didn’t follow the events closely at the time, it’s almost impossible to walk away from Confirmation without the impression Anita Hill (played by Kerry Washington, who was also a 2012 Democratic Convention speaker) was absolutely a victim… all while the movie conveniently buries this little nugget: By a 2-to-1 ratio, according to a CBS News/New York Times poll at the time, Americans believed Thomas over Hill. Here’s the New York Times headline on October 15, 1991

THE THOMAS NOMINATION; Most in National Survey Say Judge Is the More Believable

So yes, do the movie by all means, but at least try to be honest about the way Thomas and Hill were perceived by the public. The movie would make you think Hill won in the court of public opinion and those conducting the hearings — including then-Senator Joe Biden — were insensitive, downright mean. Another nugget: The movie is so generous to Hill’s perspective, Anita Hill herself is doing a media tour the promote the movie, which isn’t unlike Dan Rather before the box-office bomb, Truth… a hilarious history rewrite starring Robert Redford as Rather that brings the former anchor’s steadfast claim of accuracy around documents proven to be fake regarding George W. Bush’s national guard duty to a whole new, sad, level.

But back to Confirmation, it should also be noted that former Republicans senators (Alan Simpson and Jack Danforth) depicted in the film are furious at the portrayal and are even threatening legal action.

“I don’t know what I’ll do but it won’t be fun and games,” Alan Simpson told Politico. “I won’t just sit still. I’ll have a response, I always have. An attack unanswered is an attack believed.”

Former Bush 41 White House and Thomas lawyer Mark Paoletta goes even further, also in a statement to Politico in February upon reading the script:

“Based on the script I reviewed, it’s a dishonest film. It takes some real facts, even some real testimony, and mixes it with lots of made-up dialogue and imaginary people — all with the intent of presenting the hearings in a very one-sided way. It is clearly not a fact-based film. It’s a propaganda piece for Anita Hill and for Hillary Clinton’s run for the White House. It’s unfair to Clarence Thomas, Jack Danforth and, most surprisingly, to Joe Biden.”

HBO Films president Len Amato calls the film, “evenhanded”. Uh-huh. So here’s an open question for the fair and balanced Mr. Amato: When are the following films about other big political events that dominated news cycles going to be made? There’s a few in relatively recent history to choose from, including:

That other half of Game Change: HBO did an almost-cartoonish reenactment of the 2008 campaign based on the tremendous book by Mark Halperin and John Heilemann. Or did it? Because if you actually read the book, there’s half of it missing in the HBO film that solely concentrated on the GOP side. Again, make that film starring Julianne Moore as Sarah Palin. Again, nobody’s saying not to given how much material the former Alaska governor provided. But when’s that movie version about the bungling and contentious campaign of Hillary Clinton and all the back-and-forth hostilities with Team Obama, which made for equally-as-compelling reading? Answer is that HBO won’t touch it in a million years… and that’s a shame if reaching the broadest audience were the objective.

The John Edwards affair-producing-a-love-child-while-cheating-on-his-cancer-stricken-wife could also be quite compelling, but HBO has made no such announcement around going down that road. And Bill Clinton had an affair with an intern in the Oval Office that included some opportunities for the kind of provocative scenes the network seems to particularly enjoy, so when’s that movie coming, Mr. Amato? A brunette Amy Schumer as Monica would add thousands of subscribers on the day the movie is announced alone.

But it’s not reality, it’s HBO. A pay channel that has produced some of the best original programming in the history of television: The Larry Sanders Show, Entourage, The Sopranos, Boardwalk Empire, The Wire, Sex in the City, Game of Thrones, Band of Brothers, Curb Your Enthusiasm. All tremendous.

But its movies only offer up one side of the story… only go after that other side of the aisle.

If HBO Films really want to serve as a political history class, it might want to consider changing its omission policy.