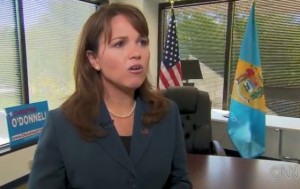 Every journalist knows that when a politician tells you to “call my people and set something up,” that’s usually a definite signal not to hold one’s breath. In a shocking exception to that rule, media-phobic Senate candidate Christine O’Donnell made good on such a promise to CNN’s Jim Acosta the very next day.

O’Donnell may yet regret that decision, however, because when Acosta asked her if Sarah Palin is qualified to be President, O’Donnell couldn’t bring herself to respond in the affirmative (cue angry email from Todd Palin). The rest of the interview wasn’t much better. (h/t TPC)

What was O’Donnell’s response to the Palin for President question? “Is she running for president? Again, hypothetical.”

Ouch! Any Palin-backed candidate who’s reading this, repeat after me: “Is Sarah Palin qualified to be President? You Betcha!”

Even if you don’t believe it, just mutter “President of poop!” under your breath. This ain’t rocket science creationism.

As The Political Carnival points out, O’Donnell doesn’t think much about much, although she does offer up the threat of a Hillary Clinton candidacy to scare President Obama off of a health care repeal veto.

It definitely could have been worse, though. O’Donnell’s megawatt charm certainly does shine through, and she manages to successfully recite some GOP boilerplate. She’s most successful at answering for the parade of Bill Maher clips that have been trotted out to embarrass her, speaking about her youthful enthusiasm for a “new-found faith,” and saying that she saw the show as a “ministry opportunity.”

O’Donnell may have a witch’s chance in Salem of winning that Senate seat, but her camera-ready persona could have her casting a spell on cable news audiences for years to come.