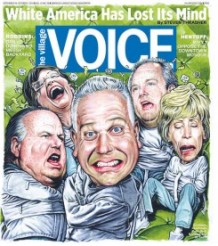 Day was one awaited the Tuesday night delivery of early Village Voice copies with a certain amount of anticipation (or at the its classifieds…but the rest of the paper to some extent, also!). These days the Voice generally makes itself known in the media world through its excellent blog Runnin’ Scared or by way of plain old aggregation, which is how I came across last week’s cover story: “White America Has Lost Its Mind: The white brain, beset with worries, finally goes haywire in spectacular fashion.” Which is sort a spectacular title, it must be said and attempts to explain the current national mood. Behold.

It had been a pretty good run up to that point. The brains of white folks had been humming along cogently for near on 400 years on this continent, with little sign that any serious trouble was brewing. White people, after all, had managed to invent a spiffy new form of self-government so that all white men (and, eventually, women) could have a say in how white people were taxed and governed. White minds had also nearly universally occupied just about every branch of that government and, for more than two centuries, had kept sole possession of the leadership of its executive branch (whose parsonage, after all, is called the White House).

But when that streak was broken—and, for the first time, a non-white president accepted the oath of office—white America rapidly began to lose its grip.

That’s the thesis, more or less. Here’s some, er, highlights:

Indeed. If nothing else, no one can accuse the Voice of not having cojones. Read the full piece here.