Is Trump Laying Groundwork for Independent Run With 9/11 Comments? 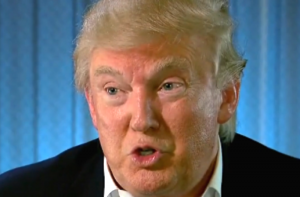 Democratic presidential candidate Jim Webb is reportedly going to seek a third party run at the White House, but he’s not the only contender who’s considering such a move. Republican darling Donald Trump has floated the idea before, and I’m beginning to wonder if he still might go rogue.

If there’s one thing Trump has flip-flopped about more than anything else, it’s whether or not he’s actually going to support the eventual GOP nominee (should he not get the nomination) and not run as a third party’s presidential candidate. Considering his latest talking point — that former President George W. Bush was to blame for the Sept. 11 terrorist attacks — it seems Trump is on the fence. Again.

In early September, Trump signed a “Republican Loyalty Pledge” while Republican National Committee chairman Reince Priebus allegedly looked on in an approving, if not weary, manner. The GOP’s leading presidential candidate subsequently announced at a press conference that he would “totally [pledge] my allegiance to the Republican Party, and to the conservative principles for which it stands” in a weird rendition of the Pledge of Allegiance of the United States.

Not that Trump signing his name in illegible, Sharpie-thick black ink really means anything. After all, the pledge was instituted after the New York real estate mogul repeatedly claimed he wouldn’t rule out an independent run, and when Fox News’ Greta Van Susteren brought this up with Priebus, the RNC chairman emphasized that “for some people, their word is their bond.” But is it really that clear-cut for Trump?

He’s fluctuated between praising Hillary Clinton, Jeb Bush and Ryan Perry in previous statements, and condemning all three outright once he became a viable presidential candidate. Despite what Ann Coulter said, this did happen, and it happens often. Not only in terms of praise and insults, but policy as well, like when Trump flip-flopped on flat tax rates when pressed by Steve Doocy on Fox & Friends. In other words, Trump’s word doesn’t form as tight of a bond as Priebus seems to think it does.

So why is he attacking W. and Jeb over the matter of whether or not the former kept America safe since Sept. 11 happened? Unlike the majority of Trump’s asinine political attacks, this one cuts to the core of what most conservative believe — that, while more probably could have been done to prevent the terrorist attacks, former President Bush reacted to the events in an appropriate manner. If anything, it seems more like the kind of thing that… well… someone who wasn’t trying to seek the GOP nomination would say.

The reaction is telling. There’s the conservative response, which either defended the former president’s actions during and after Sept. 11, or ridiculed Trump for his seemingly leftist stance. The first is characterized by Jeb, who called the attack on his brother “pathetic.” Trump unsurprisingly responded by calling into question Jeb’s assertion that his brother “kept us safe.” Jeb then told CNN’s Jake Tapper that “the great majority of Americans believe” his brother kept America safe after Sept. 11, and that he didn’t know why Trump “[kept] bringing this up.”

The second conservative line popped up among 24-hour cable news show hosts and pundits, like when Fox News’ Dana Perino equated Trump’s attack on W. to “liberal conspiracy theories” and “soft trutherism.” Republican congressman Peter King (R-NY) echoed Perino’s sentiments when he told Megyn Kelly that Trump’s claims were “totally misleading and untrue,” and that they made The Donald “[sound] like a left-wing Michael Moore wacko.”

Then again, that’s just one of the two major varieties of what-did-Donald-Trump-say-this-time. The liberal response to the Republican front runner’s Sept. 11 comments is summarized best by Comedy Central personalities Trevor Noah and Larry Wilmore, who each took slightly different-yet-similar approaches to the story on Monday night. Noah confessed on The Daily Show that Trump was “not wrong,” at least “within the factual confines” of what is now known about the terrorist attacks. Wilmore, meanwhile, used his Nightly Show to ignore Trump’s comments and attack Jeb for defending his brother.

So yeah… the comedic offspring of Jon Stewart, the man who famously dubbed Trump “F*ckface von Clownstick,” are passively supporting his attack on W., and thereby supporting him against Jeb’s counterattacks and the conservative media’s renewed ravings about “liberal conspiracy theories.”

You still think he won’t shoot for a third party run if the GOP nomination goes to someone else?