If He Wasn’t My Father, I Would Mace Him: Ivanka’s Response to Father’s Jokes About Wanting to Date Her [UPDATED] 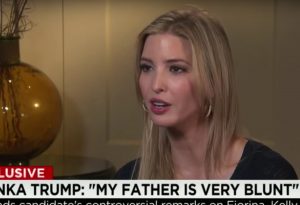 Donald Trump’s fascination with daughter Ivanka Trump‘s sex appeal is nothing new. His comments regarding her appearance were featured in a campaign ad prior to his election. Comments of his regarding how much he loves kissing her and how much more sexually attracted he was to her than his own wife when she was only 13 years old have been reportedly scrubbed from television and newspapers. He once assured Howard Stern that it was fine to call her “a piece of ass.”

Now, proving Ivanka’s own point that when it comes to her father, “what you hear is what you get,” a journalist named Sarah Kendzior has found the young woman’s response to her dad’s comments.

Never saw much reporting on Ivanka’s response to Trump saying he wanted to date her: “If he wasn’t my father, I would spray him with Mace.” pic.twitter.com/RVlP4DdIc1

So, what you heard (and, subsequently, got) was what she heard, too. When he suggested that if she weren’t his daughter, “perhaps [he’d] be dating her,” she quipped, “If he wasn’t my father, I would spray him with Mace.”

The find is particularly noteworthy because there hasn’t been much reporting on what the young lifestyle brand entrepreneur thinks of the, uh, praise.

The quote can be found at the bottom of this page. It was featured in the Chicago Tribune‘s “Quoteables” section in 2004.

Today has been a banner day for news outlets getting duped by jokesters, what with pretty much every blog falling for the CNN-aired-porn-on-TV thing this morning. However, did you know that falling for jokes is a time-honored tradition among those in the news media?

This quote that was attributed to Ivanka Trump — “If he wasn’t my father, I would mace him” — by the Chicago Tribune isn’t real! The “Quoteables” attribution is real and appears to have really run in the Tribune in the early 2000s after Donald Trump quipped that if Ivanka weren’t his daughter, he might be dating her. The quote itself, though, seems to have originated with Conan O’Brien, who jokingly suggested Ivanka’s response, according to Snopes.

His spoof was printed in the Shreveport Times‘ “News for Dumb Guys” section, which could be where the Tribune picked it up.

If you thought that only blogs in the digital age write stories about gags as if they were real, the joke is actually on you.