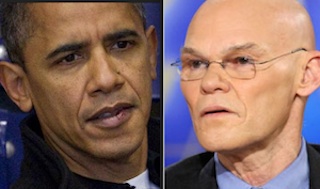 June has been a tough month for President Barack Obama and the Democrats. A poor jobs report and the President’s “private sector” gaffe have dominated news cycle after news cycle. But those short-term issues appear to be illustrative of a deeper trend, one that connects back to long-term economic conditions and doesn’t bode well for the fall.

A memo released this week by the non-profit group Democracy Corps, led by cable-news favorite James Carville and former Clinton pollster Stanley Greenberg, concludes that President Obama’s economic message simply has not stuck with oft-discussed ‘swing voters.’ The analysis tries to pinpoint where the President’s advertisements and economic rhetoric have faltered and offers a relatively bleak prognosis for Democrat’s electoral chances unless they are to significantly alter their emphasis going into the fall. A possible new message should be one that “contextualizes the recovery but, more importantly, focuses on what we will do to make a better future for the middle class,” Carville and Greenberg suggest.

The group’s analysis was drawn from focus groups with a variety of Obama and McCain 2008 supporters across different socio-economic groups. One set of panels was held with non-college educated voters in Columbus, Ohio and another set was held with college-educated whites in the suburbs of Philadelphia. Neither group, it appears, is all too happy with the rhetoric coming out of the administration and the authors go so far as to say that it “produces a fairly diminished embrace of Obama and the Democrats, the lesser of two evils, without much feeling of hope.”

While we should expect unhappiness with the incumbent in such tough economic times, Carville’s analysis is intriguing because it doesn’t reveal any particular enthusiasm for former Gov. Mitt Romney’s ability to handle today’s crises either. The front page of today’s New York Times featured a report by the Federal Reserve that the wealth of the median family in the United States has dropped to levels not seen since the 1990s. The Eurozone is growing increasingly unstable as the Greeks approach a parliamentary election on June 17 and the continent makes plans to bail out Spain. If these median, non-partisan voters really feel that Romney is “out of touch”, that they “can’t trust him” and that he “doesn’t have a clue”, then what is holding back their support for the president?

One curious problem participants had with the Obama campaign was its advertising. ‘Forward’, an ad that attempts to frame the history of the recovery in the way that Carville actually suggests it should, did not garner approval from anyone other than previous Obama supporters, and “the spots that simply talk about progress on the economy did not do well,” even with Obama supporters. Participants even responded negatively to the campaign’s targeted issue ads, including one about the rescue of the auto industry. “Good job for the autoworkers”, wrote one participant, “but where does that leave my grandchildren?”

If “grocery store” issues and the future of the economy are to be the focus of this election, how can the president’s campaign team expect to be successful when both a 60-second encapsulation of their economic message and more targeted examples of their success are failing, even with moderate supporters? President Obama’s rough month has made it clear that a shift in tone is needed, and Carville prescribes “messages that connect on a pocketbook level and commit to the programs voters rely on.” But as gridlock in Congress holds up honest discussion of new policy proposal until after the election, is it too late to make a significant change?