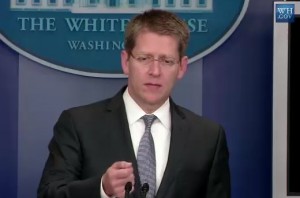 Just when things were going so well for Mitt Romney, White House Press Secretary Jay Carney has to come along and throw a wrench into the works. Romney overtook former frontrunner Rick Perry in a Fox News poll, but a favorable quote from President Obama‘s spokesman isn’t likely to be helpful. Carney was asked about the pending lawsuit against the Affordable Care Act, and buttressed his response by quoting Romney as saying that the individual mandate was “a conservative idea.”

Romney defended his state’s individual mandate at length on Sean Hannity’s radio show Wednesday, and Carney was apparently listening. Asked if the President is disappointed that his health care reform law is going to the Supreme Court, and could “potentially be a divisive issue, he reiterated the administration’s confidence that the law will be upheld, spoke about the benefits that Americans are already seeing from the Act, and then he went to work on Romney.

“Not only have lower courts upheld (the law’s) constitutionality,” Carney began, “but the fact of the individual mandate being both constitutional and wise policy is an opinion shared across the ideological spectrum. A former governor of Massachusetts just said, the other day, ‘The idea for a health care plan in Massachusetts was not mine alone. The Heritage Foundation, a great conservative think tank, helped on that. I’m told Newt Gingrich, one of the very first people who came up with the idea of an individual mandate, did that years and years ago. It was seen as a conservative idea to say, you know what? People have a responsibility for caring for themselves if they can. We’ll help people who can’t care for themselves, but if you can care for yourself, you gotta take care of yourself and pay your own bills.'”

“That’s the former governor of Massachusetts describing the individual mandate, and why it’s smart policy, and we certainly agree.”

The fact that Romney has to defend the mandate at all (while dragging Newt Gingrich down with him) is a political problem in and of itself, but he needs Jay Carney amplifying, and agreeing with, his quote like he needs a hole in the head. Not for nothing, but you’re not likely to hear anyone in the Obama administration defending a policy by quoting Herman Cain anytime soon.

Here’s a clip of Romney’s remarks, from ThinkProgress: