Earlier this week, Pastor Joel Osteen, head of the Houston-based Lakewood Church, best-selling author, and world-renowned televangelist, was the victim of an elaborate online hoax.

The prank — complete with fake, photoshopped headlines from CNN, Drudge Report, and Yahoo!; fake press release; fake website; fake Twitter account; and fake YouTube video — claimed Osteen had announced he was leaving the Church, citing his newfound atheism and rejection of the faith. 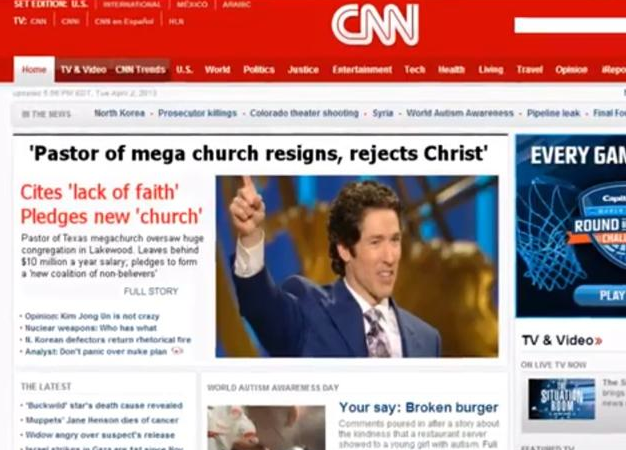 Some may be quick to dismiss this story with a quick laugh and a snort. It’s just a silly and funny joke, right?

Dismissing it as such, however, overlooks the ‘devil in the details,’ as well as the broader picture. This hoax represents an epidemic in America: the acceptable trend that it is cool, ‘hilarious,’ and enlightened to ridicule or attack Christians.

These pranksters could’ve chosen any celebrity on which to perpetuate a hoax. Note, however, how they deliberately selected Joel Osteen in particular. Osteen, you see, is considered by many as the face of American Christianity, with his sermons broadcast to millions on television, his books selling even more, and his church and appearances attended by throngs of the faithful.

Whether one is an Osteen-devotee, an atheist, an agnostic, or simply uninterested in Osteen, few could deny the man’s heart is in the right place or the positive impact he has on so many lives, with his uplifting, inspirational advice. So why single him out? Because he’s a notable Christian. Pranks like this are not committed against the leaders of any other faith.

Christian ridicule has become par-for-the-course among the Left, particularly among those who wear it as a badge of some sort of intellectual superiority. The snark, guffaws, or outright insults are so common, Americans are almost accustomed to it. Watch Glee, HBO’s Real Time with Bill Maher, or almost any television show: sneers of Christian ‘hypocrisy’ or Christian ‘ridiculousness’ are front-and-center. Spend a few hours on Twitter – the insults against Christians are endless. In nearly ever medium, attacks on the faith and its adherents are applauded or, at best, simply ignored and accepted.

Often the sneers are instead outright attacks, most recently demonstrated last month via the university professor who engaged his class in a so-called thought-provoking exercise where they were asked to step on the word ‘Jesus.’

Consider the amount of time and effort involved in this incredibly elaborate prank. Why invest such interest and detail on a ‘simple joke’? Well, that’s because it isn’t a ‘simple joke’ at all – it is part of the almost-coordinated attack on Christian America.

On Hannity this week, Dr. Ben Carson, an African-American conservative and devout Christian, noted the Alinskyite tactics employed against him. Indeed, Saul Alinsky, in his famous Leftist text, Rules for Radicals, noted: “Ridicule is man’s most potent weapon.”

This hoax on Pastor Osteen was not good-natured silliness– it was a formidable employment of Alinsky 101 in an ongoing war to ostracize, belittle, and ultimately eliminate Christianity.

Take a bow, pranksters. You spent countless hours attacking a man whose life is dedicated to helping others. While most of us hope you’ll find a worthwhile hobby (and perhaps a girlfriend), hey, at least Alinsky would be proud. Surely that provides you with more comfort than Osteen’s words ever could.