Jon Stewart On Glenn Beck Restoring Honor Rally: ‘I Have A Scheme’ 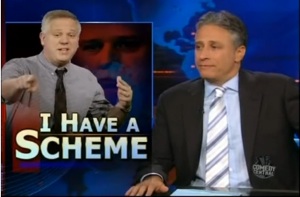 Last night Jon Stewart claimed that, since he and his staff are about to embark on a 10-day vacation, there was “one important event we’re not going to be around to cover.” He then launched into a 10 minute segment that described, ridiculed and bewildered at Glenn Beck‘s “Restoring Honor” Rally planned for this Saturday at the Lincoln Memorial, the same exact day and place that Martin Luther King, Jr. delivered his “I Have a Dream” Speech that helped shape this country’s civil rights movement of the 60’s.

Hardcore fans of The Daily Show and dyed-in-the-wool progressives may actually end up being disappointed in Stewart’s effort to deride Beck and his efforts. Sure, there are lots of funny jokes in the following segment — regarding the alleged co-opting of MLK’s famed time and place in civil right’s history, Stewart said “some people see insensitivity, Glenn Beck sees an insensi-tunity.” But given the very high standards to which Stewart holds himself – particularly when it comes to debunking mythic opinion media leaders that he finds absurdly hypocritical – some may watch the following segment and come away disappointed.

The challenge in openly mocking Glenn Beck is that he is very slippery target. He’s not really the two-dimensional buffoon, as many who don’t regularly watch his show consider him. Is he immune to criticism? Of course not – but the outline of his alleged absurdities and hypocrisies are littered with banal comedy killers like “faith,” “hope,” and “charity.” The fact that Beck has publicly asked that no political signs be displayed at his rally doesn’t help those eager to mock him, fairly or unfairly.

There is of course the Goldline controversy , which makes a predictably funny appearance below. But the math of all the comedy bits built into the segment below, doesn’t quite up to the amount of “funny” one would expect from Jon Stewart.