Joy Reid: If Media Didn’t Cover Trump’s Tweets for a Week, He Would do a Press Conference 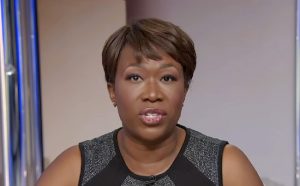 One thing that has been frustrating those in the media now that Donald Trump is about to be President of the United States has been his reluctance to hold conventional press conferences. Trump has not held a full news conferences since late July and canceled a proposed one in mid-December where he said he would use to address his business interests. He has since announced that he will hold a presser next week.

In the absence of regular press conferences and interaction with the media, Trump has taken to Twitter as his main mode of public communication, generally taking to the social media platform daily to send out a few missives that are then widely reported by the press. Case in point, this morning, with the news centered on the president-elect meeting with intelligence leaders to be briefed on a report that shows Russia meddled in the election, he sent out tweets blaming the DNC for the hacks and calling people “stupid” for not wanting a good relationship with Russia.

Only reason the hacking of the poorly defended DNC is discussed is that the loss by the Dems was so big that they are totally embarrassed!

Having a good relationship with Russia is a good thing, not a bad thing. Only "stupid" people, or fools, would think that it is bad! We…..

In regards to this issue, MSNBC host Joy Reid appeared on SiriusXM Radio’s The Dean Obeidallah Show yesterday and issued a bit of a challenge to the mainstream media.

Host Dean Obeidallah asked Reid about Trump’s tweeting habits and whether there would come a time soon where he’d reach a “jump the shark” moment and the media would stop breathlessly covering them. While Reid said she hoped so, she also posed the following scenario for the press.

“The say, look, we’re all going to agree that we’ll blackout Donald Trump’s tweets, for let’s say, a week,” Reid noted. “Starve him of the thing he needs most, which is free publicity. He literally is like a machine that feeds on attention and publicity.”

Reid added that he doesn’t have to do a press conference because “we slavishly read everything he tweets.” She further explained that aides like Sean Spicer and Kellyanne Conway are losing credibility because they stick their necks out to explain his tweets and he’ll immediately contradict them with another one.

Listen to the portion of the interview above, via SiriusXM.