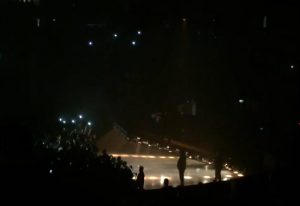 A Saturday night concert in Sacramento, California, came to an abrupt end when Kanye West launched into a lengthy tirade that covered subjects as varied as Hillary Clinton, Donald Trump, Beyonce and Jay Z apparently wanting to kill him.

West already made headlines last week over another concert that included a political rant where he confessed that he didn’t actually vote in the presidential election, but if he had, he would have voted for Trump. He also chided black people for talking about racism too much at that show.

On Saturday, Kanye showed up to the Golden 1 Center 90 minutes late. After performing three songs, West stopped to go off on a bunch of stuff that was apparently upsetting him.

First off, he wanted it to be known that Beyonce — an artist who he has vehemently defended and lauded over the years, including his infamous interruption of Talyor Swift at the 2009 MTV VMAs — wouldn’t perform on a show if she wasn’t promised an award. He also claimed that Beyonce’s husband, Jay Z, had “killers” and he didn’t want them coming at his head, asking Jay Z to call him.

After continuing on, he decided to end the concert by first informing the media to get ready with their “passive aggressive LeBron James racist comments” and then dropped the mic, saying the show was over.

Kanye West tells the crowd the show is over after performing 3 songs. #SaintPabloTour #SaintPablo so much disbelief.. ? pic.twitter.com/skre0y678Z

Obviously, the audience was far from pleased about the concert ending after just three songs and a late start.

Crowd chanting "F*** you, Kanye" after he showed up an hour & a half late, sang 3 songs, ranted, ended show. #SaintPabloTour pic.twitter.com/cQ7V6pox8R

According to ABC 10’s Frances Wang, who was on the scene, the crowd was disappointed, shocked, angry and wanted their money back.

Watch clips of Kanye’s rant above.