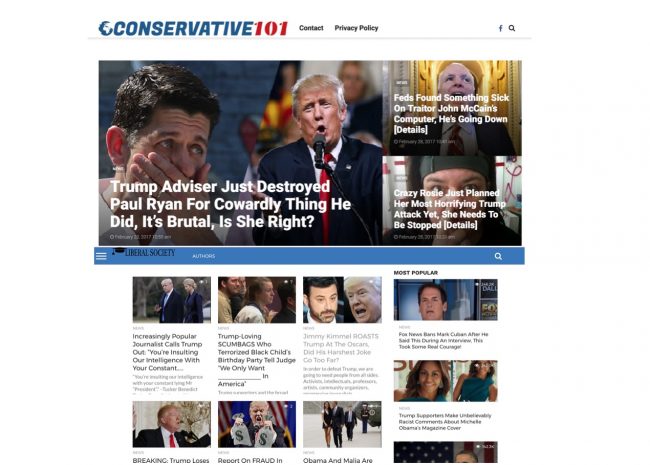 The contrived headlines are designed to make readers angry before they even open the piece, but open the piece they do. People just love to get mad online, as anyone who’s ever spent more than two seconds in a comment section can attest. Clicking an article like that can feed a consumer’s appetite for rage and line a website owner’s pocket. Remember: clicks equal ad revenue.

So does it surprise you to learn that two hyper-partisan clickbait mills are owned by the same company? Are you shaken to your core to find out that the sites Liberal Society and Conservative 101 are not helmed by principled progressives and conservatives, respectively? Are you devastated to learn that money and manufactured outrage are more important than deeply-held values on one side of the aisle or the other?

We can’t really help you if any of this truly shocks you, but we can show you what Buzzfeed — who noticed the similarities between the sites’ output after they both published versions of the same story about Kellyanne Conway — wrote:

After CNN reported White House counselor Kellyanne Conway was “sidelined from television appearances,” both sites whipped up a post — and outrage — for their respective audiences. The resulting stories read like bizarro-world versions of each other — two articles with nearly identical words and tweets optimized for opposing filter bubbles. The similarity of the articles also provided a key clue BuzzFeed News followed to reveal a more striking truth: These for-the-cause sites that appeal to hardcore partisans are in fact owned by the same Florida company.

The two stories about Conway, Buzzfeed noted, relied on the same tweets and quotes to tell one story from two very different angles.

Both sites are, according to Buzzfeed, owned by American News LLC, which is run out of Miami. American News also operates liberal site Democratic Review, religious site God Today, and the eponymous American News. The American News Facebook page has over 5 million fans and Liberal Society has over 2 million, so you can see how popular these angled stories are and how easy they are to spread.