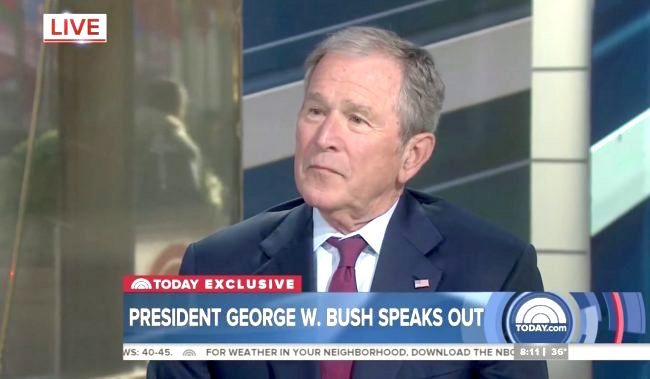 President George W. Bush gave his first major interview of the Trump era to Matt Lauer and the Today Show yesterday. His purpose was to promote a new book that benefits wounded military veterans. Of course, all anyone was really interested in was whether he would take any jabs at our current president.

In the modern media era there is simply nothing more enticing than a celebrity feud and the prospect of creating one between the last two Republican presidents (ever?) was as irresistible as making Steve Harvey jokes about the fiasco finish to the Academy Awards. For the most part, Bush, being the classy guy he is, resisted the temptation to take on Trump directly. However, he did throw enough ‘shade’ towards Trump to get some attention (and, oddly, some newfound ‘respect’ from liberals who not long ago saw him as the ‘worst president ever’).

Bush went out of his way to bring up Vladimir Putin, Trump’s BFF, in the context of a free press while then defending the importance of the new media, Trump’s arch-nemesis, to a democracy. He then said that he thought that we all deserved answers (but did not endorse a special prosecutor) regarding Russia’s role in Trump’s election.

While Lauer gave Bush plenty of opportunity to ‘dis’ Trump (it’s weird, but I don’t recall any mainstream media being remotely interested in Bush doing the same with Obama just one month into his presidency), for the most part Bush took the high road and even defended Trump at times.

There was, however, one thing that Bush said when asked about Trump that was an incredibly perceptive and significant observation. Unfortunately, but all too predictably, it has been just about completely ignored.

When addressing whether Trump has done enough to unify the country, Bush said this:

It’s hard to unify the country though with the news media being so split up. When I was president, you [Lauer] mattered a lot more. Because there was like three of you. And now there’s all kinds of information being bombarded out. And people can say things anonymously. It’s just a different world.

If the was one only concept that I wish every American understood about the modern news media, this one, though inartfully articulated in classic Bush style, would be it. It is a notion so important to me that I wrote a book in 2005 largely devoted to how a fragmented media was dividing our country.

While Bush may have some selective memory about how splintered the news media already was when he was president, there is no doubt that the process of the media carving us all up into tasty demographic morsels has accelerated since he left office. The immediate aftermath of 9/11 was the last time (ever?) that the entirety of our news media — and thus the nation itself — was almost entirely on the same page.

Some may say that such extreme unity of information is inherently ‘bad’ because it presumes a lack of diversity of perspectives, and I think that there is truth in that concern. However, there is also no doubt that we have now gone way too far in the other direction. Forget about all being on the same page, now we literally aren’t remotely unified even on what the title of the book is, or even in what language it is printed (heck, some of us probably barely even know what books are anymore!).

Taking this out of the theoretical and putting it into the real world, just take a look at all of the stories from the same day as the Bush interview, which would not have occurred without the massive media fragmentation of the 500-channel TV and unlimited Internet universe.

Regardless of your political persuasion, this issue should concern you because it is pervading nearly every aspect of American life in a way which, while often good for economic efficiency, has devastating consequences for who we are as a people and our ability to face the big challenges. It has taken a lot of the fun out of being an American.

The worst part about it is that there is very little hope for any of this get better. I believe Trump fully understands this (far better than he does the healthcare system, apparently) and has decided to take advantage of it rather than try in vain to correct it. This is why he doesn’t give a damn about obtaining the support of the majority of the American people. He got elected without that and he will govern the same way.

As President Bush told Lauer, “you mattered a lot more (when I was president).” Trump has wagered his entire presidency on this being true and, at least right now, it doesn’t look like that bad of a bet.